Terry Meiners and Rachel  Platt hosted me on their show, Great Day Live, back in July of 2014.

This episode was a lot of fun. Great people. If interested, listen to the 3 minute tutorial on ham making, complete with an overview of the book. 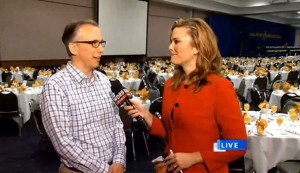 From Steve’s Words to Chew On blog at InsiderLouisville.com.

Who knew the sweet business of ice cream could get so bitter in the space of a week?

Well, if you buy into the acrimony of the catty-chatty cacophony on the restaurant forum of Louisville HotBytes, you might imagine the relationship between those two ice creameries has already curdled.

A summary of the silliness: The highly regarded Comfy Cow opened its highly anticipated third ice cream and desserts shop this month at 2211 Frankfort Ave. on the site of the lowly regarded Genny’s Diner — whose loss isn’t even remotely lamented. (OK, I’ve had my alliteration fix.)

Also in October, Homemade Ice Cream & Pie Kitchen opened its 9th site at 2233 Frankfort Ave. — a distance so close, you couldn’t eat a single scoop walking from one to the other on July 4th.

“I’m sure the guys (Comfy Cow owners Tim and Roy Koons-McGee) are proud that they got open before the new Homemade Ice Cream and Pie Kitchen that decided to open across the street.

“I ran into co-owner Tim at Heine’s the other day, and he mentioned – with a big wink – that this Comfy Cow will be the only one in town that has homemade pies and cakes.   I think they’re probably going to wipe out HIC&PK at that location.”

That last line brought out the HIC&PK defenders in full force and the serious mooing began.

“What do you have against the HIC& PK?” wrote Allison Hanover.

“But you don’t think it was a bit underhanded for HPIC to decide to open a store across the street from Comfy Cow immediately after CC announced their plans?” responded Mike Hardin.

“I don’t see it as underhanded on anyone’s part. It seems like good ol competition to me,” Bill P volleyed back.

And on it’s gone for days now with accusations of rude business practices levied against HIC&PK and comments about how both Koons-McGees are good guys who shouldn’t be treated so meanly and how it’s all just capitalism and competition.

It took four days before Adam Burckle, owner of HIC&PK, finally weighed in, explaining in a 794-word reply to the nattering nabobs of negativism that his business had planned a new ice creamery in that spot in 2007, well before Comfy Cow was even a cuddly calf in the creative womb of the partners Koons-McGee.