It took more than three years to sell one of Louisville’s (formerly) busiest restaurants, but according to WDRB.com, Lynn’s Paradise Café has been sold.

To whom, I don’t know. The story mentions a restaurant group that “will reveal itself in a couple of months,” but in the meantime, even my best restaurant real estate sources haven’t a clue. 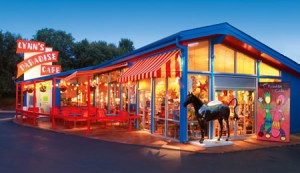 Of course Fernando Martinez’s name came up on the quick short list, so I shot him a “You buy Lynn’s?” text. His answer was a succinct, “Hahahahaha.”

A former journo, news photographer buddy said he heard it’s a barbecue concept out of Nashville, so I’ll follow up on that one.

The good news is a restaurant will return to this once-bustling spot. Nearby businesses saw sales plunge when LPD shut down because it was a crowd magnet. Without that foot traffic, some closed up shop—like Lynn’s and because of Lynn’s.

And if the micro-story reported by WDRB tells all, former owner Lynn Winter will not be involved with it. Doubtless her demand that any buyer keep her involved in the business after the sale was what kept the lights and coffee brewers off at the Barret Ave. kitsch kingdom. Winter seemingly could not accept the message that No. One. Wanted. To. Work. With. Her.

The super successful restaurant (reportedly $4 million in annual sales) found itself in a tailspin in January 2013 after one of its servers revolted over a change in policy regarding the amount of cash each had to carry on the job. The server’s grievance, posted on the least friendly spot on the planet, Facebook, started a firestorm of anti-Winter sentiment that would not die down. Yet instead of moving to battle the bad publicity over the alleged mistreatment, Winter shut it down and sent the staff packing.

Winter is a complex character. Always has been. And she walked that fine line between creative genius, visionary, brilliant marketer and flighty-forceful entrepreneur for many years. Yet her regular retreats away from the restaurant to her second home in California harmed the business. As “the personality” behind LPD, her absence was notable and it showed in declining service and food quality. Plus, any veteran LPD staffer will tell you she was not easy to work for.

Best of luck to the mystery operators who will take over that space. It’ll draw diners to that midland between the Highlands and Germantown, an area of town I’d love to see take off.

If I had any advice at all to give to the next owner, it’s this: Make sure it looks not a thing like Lynn’s Paradise Café. That brand is forever besmirched in this city.

Answer: Lynn Winter, because she has the sense to keep her mouth shut before the press.

In a week when Lance Armstrong loosed his lying tongue and Manti Te’o lacquered his loony “girlfriend hoax” story with even more questionable quotes, Winter shut down her uber-busy, 22-year-old, nationally recognized restaurant last Friday, saying it was time for a new chapter in her life.

That’s it. Bye-bye, restaurant that does $4 million a year in sales.

Disconnect the giant coffee pot, unplug the hundred tacky lamps and shut down the World of Swirl.

A statement authored by founder and owner, Lynn Winter, was released to the press late Friday, but gave no reason other than saying, “As of January 11, 2013 Lynn’s Paradise Café has closed its doors.

“Thank you to all of our loyal customers and faithful employees for making it possible to run a 22-year business.”

Over the past week, LPC has been the talk of the town, but not for its clever food, kitschy décor or colorful owner.

(Editor’s Note: we clarified Coomes’s language to make it clear he is discussing the legality and commonplace nature of “bank” arrangements in general, not the specifics of the employment dispute in question.)

Leila DiFazio had been a server for 11 months at Lynn’s Paradise Café before being sacked Jan. 2.

Refusing to follow LPC’s new policy stating all servers had to carry a $100 cash “bank” to work each day for the purposes of tipping assistants such as bussers and bartenders.