A Scotch drinking friend says this to me about bourbon: “It’s too in your face; there’s nothing delicate about it. Scotch is about finding nuances in the spirit.”

Despite the obvious fact that he’s not drunk a lot of lower-proof bourbon, some genuine softies that drink like some Scotches, he makes a good point without trying to: that many great Scotches are delicate. 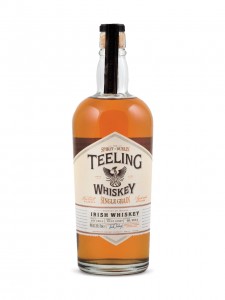 If that’s what you like, fine. But there are rewards to be gained from going bold in bourbon, and he’s not there yet. So I suggested he step into the middle by tasting some Irish whiskeys.

I’m still learning about Irish whiskeys, but I’m already a fan. They strike a delicious balance between Scotch and bourbon while asserting their own unique characters.

Basically, Irish whiskey must be distilled in Ireland and aged at least three years. In a country where the temperature range isn’t terribly wide, the spirit doesn’t take on a lot of barrel characteristics, so they’re typically aged much longer. They are, like some Scotches (save for heavily peated expressions), light bodied.

On my desk today are a pair of Irish whiskeys from Teeling, a Small Batch and a Single Grain. Same brand, but unique and different whiskeys.

Teeling is not a distiller, rather it sources its whiskey and then ages those stocks in different casks. In the case of Single Grain (which only means from one distiller), Cabernet Sauvignon casks were chosen, and for the Small Batch, rum casks. Let’s look at them individually. 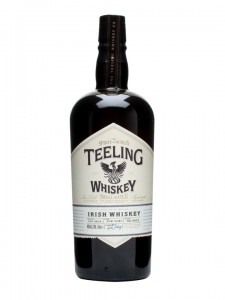 Palate: Light bodied, delicate. Some caramel and honey on entry; changes to some pepper at midpalate. Roll it around the mouth to get banana and sweet corn; very silky and feather light, so no need for water. Dry finish and no burn; super soft.

Palate: Smooth entry and quite soft at the mouth’s margins. Dry, burn-free finish, unlike many 92 proof spirits. Picks up plenty of sweet sugars from the rum barrels and a bit of spice. At midpalate there’s honey and a hint of candied orange. Slightly floral on the exhale. A few drops of water adds viscosity and body, even a little sting. Very nice. Wood appears late in the dry finish.

Summary: These are really good gateway spirits expressions for drinkers stuck in Scotch or bourbon camps. Market prices vary between $40 and $55 for each.