I don’t write much about Louisville restaurants much anymore, but when invited to a Taiwanese dinner paired with American whiskey, I’m not saying no. I knew this was too good to pass up.

Ming Pu, executive chef at The 502 Bar & Bistro in Prospect knows a thing or two about both subjects. When war between tiny Taiwan and super power China appeared imminent in the 1990s, Pu’s family emigrated from Taiwan to Vancouver, B.C., and later to Louisville. Finding little in the way of Taiwanese food in the Derby City, the family made do with facsimiles of ingredients easily found here. 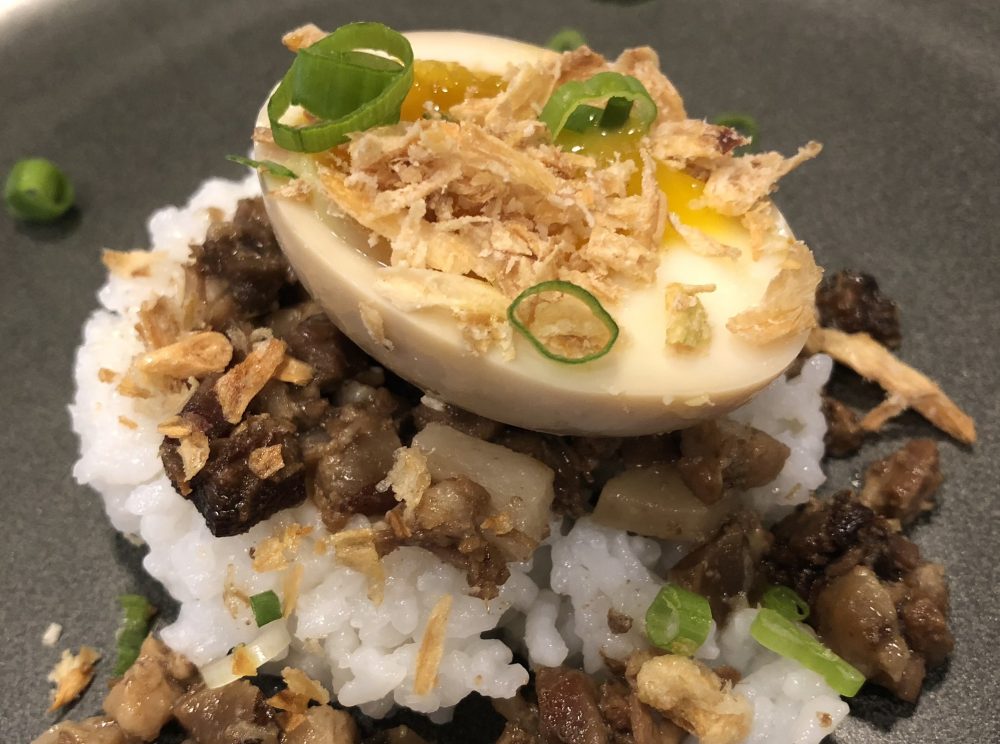 Staples found in southern food, Pu said, overlap many of those found in Taiwanese food, leaving the two somewhat easy to fuse.

“The only thing about Taiwanese food that’s hard to duplicate is it uses lots of seafood, especially shellfish,” said Pu, adding that true Taiwanese food combines the influences China’s Fujian province and Japanese cuisines. “But it also uses lots of pork and chicken, rice, and other things easy to find here.”

Like many young American chefs, Pu has developed a taste for American whiskey, yet unlike many of his peers, he’s pairing them with food. It was natural, therefore, that he’d make a mashup of his native cuisine and his adopted nation’s spirits.

“I think it surprises people to think they’d go well together, but they really do,” he said.

And they really did when we enjoyed a five course meal and pairing last week at the restaurant. Two of the drinks were cocktails, while the others were straight whiskey pairings that got along exceptionally well with the bites. I love whiskey with food, and this confirmed why. It also made me wonder why it’s not done more often.

Whiskey Nerd Alert: I’ve done a lot of large-scale food and spirits pairings, but no spirit I’ve worked with so far can rival Michter’s for its ability to complement, contrast and elevate the food to which it’s matched.

I have no facts to explain why, but I lean toward crediting these obvious differences: Michter’s enters all its whiskeys into the barrel at 103 proof, 22 proof lower than the industry standard. A greater volume of water at the beginning of the aging sees more wood sugars dissolved into the whiskey. Secondly, outside of barrel-strength releases, most Michter’s whiskeys are bottled in the mid-80 to mid-90 proof range helping create a sweeter and softer profile than many bourbons, ryes and American whiskeys in general. Experience, not any hard science, tells me this must play at least some role in making them so receptive to food. 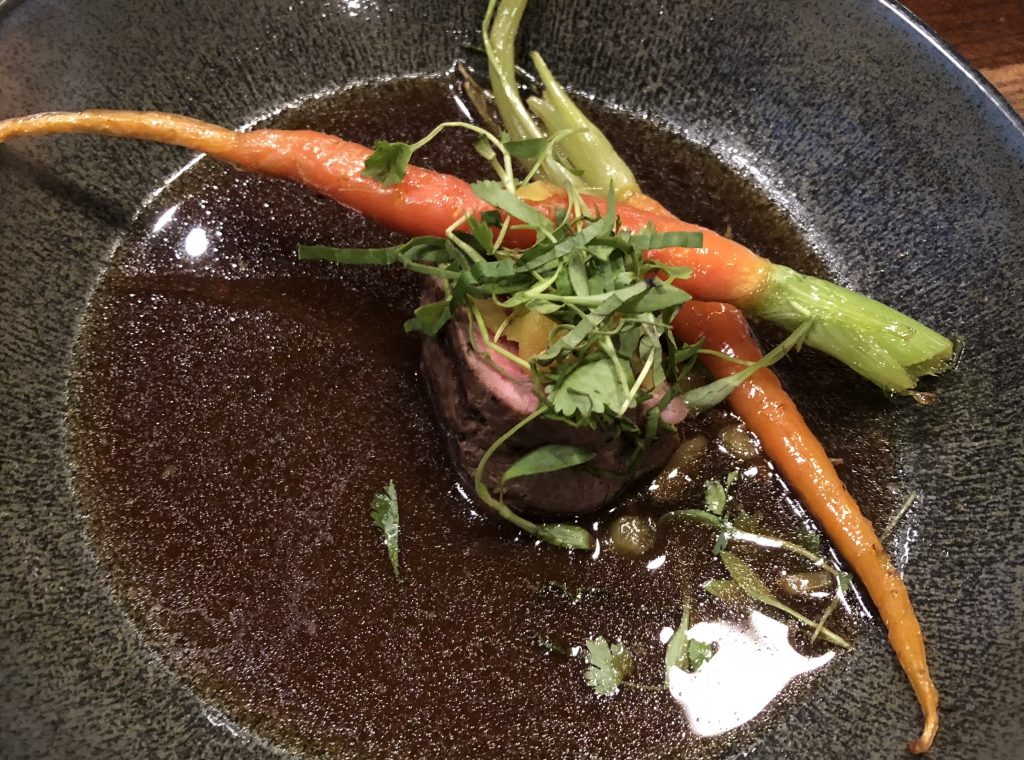 Nuff said, on to the meal.

Course 3: Berkshire pork belly, scallion oil, 63C Soy Egg, sushi rice and crispy shallots, paired with Michter’s Unblended American Whiskey. This dish was the star of the food portion of the show. The pork belly was diced, topped with the rice (that dissolved into cream in my mouth), then more diced belly and then the egg. The name “63C” is a nod to the temperature, in Celcius, at which the egg is cooked sous vide for about an hour–the final step in a multistep cooking process. The result is a firm white with a gelatinous-creamy texture; delicious and visually beautiful. The whiskey pairing was perfect. (One more Michter’s nod: the Unblended American is the distillery’s lowest proof spirit, but it’s the most versatile pairing whiskey in the lot. Don’t get hung up on its 83.4 proof; there’s plenty of flavor there.)

Pardon the interruption: At this point in the meal, I noticed many in the group of 60 or so substituting wine pairings for their whiskey offerings. We’re in Bourbon Country, people, not the Wine Country! Drink local and see how incredible it tastes! You don’t know what you missed! Rant over.

Course 4: “Niu Rou Tang,” 12-hour beef broth, Creekstone Farms Beef ribeye, heirloom carrots, Taiwanese fines herb, pickled mustard greens, paired with Michter’s 10 Year Straight Bourbon. Complex and delicious, so much so that my wife and I requested spoons for the broth. Underpinned with the Michter’s 10, the dish was amazing.

Course 5: Milk Tea Panna Cotta paired with “Taiwanese Revolver” cocktail of oolong tea-infused Michter’s Toasted Barrel Rye, Tia Maria and orange bitters. By creating this cocktail, Pu showed his chops on the liquid side of the menu. It was amazing on its own, but it was sublime with the chilly panna cotta.

Pu’s dream is to own a Taiwanese restaurant in Louisville someday, and if what he served that night is any indication of what we might see on his menu, then I’m excited for him and the city. His food is flavorful, unique, balanced and respectful of subtleties and nuances of their many ingredients. When you pair dishes like those with whiskey, their flavors practically dance together.