Arnold’s Country Kitchen is the last place I expected a food writer to suggest for a recent lunch meeting in Nashville. The 30-year-old cafeteria is humble and homely and in a downtown location some might find a bit sketchy past sundown.

But unlike any cafeteria in the U.S., it’s a 2008 James Beard Award winner, American Classic category. The bronze medallion, embossed with Beard’s bubble-headed likeness, is suspended by its red neck silk in a frame on Arnold’s wall. It’s a trophy you’re guaranteed to see since you’ll be standing in line to get a seat here. The cafeteria is always crammed with customers. 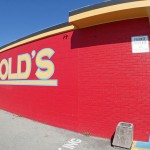 The writer, Chris Chamberlain, advised we meet at 11 a.m., when Arnold’s opened, and when I arrived at 10:45, the parking lot already was half filled with customers waiting inside their cars. At five minutes to 11, most got out and cued up outside the door. When Chamberlain arrived 10 minutes later, the line inside already was 20 people deep.