As the old saying goes, perhaps the third time is the charm for the so-far luckless restaurant spot at 450 S. Fourth Street.

Red Star Tavern, its first tenant, operated there for a few years before closing in late 2011.

Then came Mozzaria, an Italian concept that nearly self-imploded under the major misguidance of founding chef, Matthew Antonovich. Pallas Partners, the largest stakeholders in Mozzaria, parted ways with Antonovich last August and set about rescuing the troubled business. 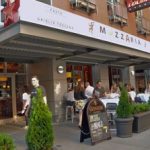