Kentucky’s two largest brewers may be cooking up something special. 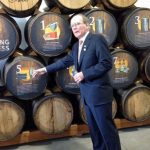 Currently, the product has been loosely dubbed the I-64 Corridor Collaboration: LBDC-BBC Limited Edition Collaboration Brew, though no official production timeline has been set.

While both breweries produce premium bourbon barrel-aged beers, there also is no indication barrel-aging will be used.