I admit to being a brandy novice. I know the basics of how it’s made, where it’s made why it’s so prized. But until I tasted the range we did today in class, I had no idea how much I’ve missed all these years.

I’ve written in other blogs about the Southern Wine & Spirits’ Academy of Spirits & Fine Service that what we’ll taste in all 12 weeks would cost a fortune at a bar. Yet without a doubt, just the cost of the brandies we’re sipping today would blow beyond the $200 cost of the whole class. There is no better educational bargain if you’re into increasing your knowledge of adult beverages and serving them.

A little history: The Dutch get the credit for creating brandywein (which means “burnt wine”) in the early 1700s by finding great wine in Cognac and distilling it. The French, however, deserve nearly all the applause for refining it into one of the world’s most cherished spirits. 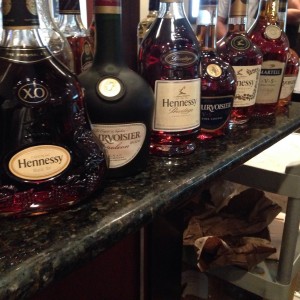 Just some of the brandy and Cognac on offer for class.

Cognac is different. (All Cognac is brandy, but not all brandy is Cognac.) It must come from white grapes that are 1. grown in the region of the same name and, 2. harvested from just six cru or grape-growing areas. It is twice distilled wine that’s aged at least two years, but often far longer.

Whiskey makers use grain, plain and simple, but brandy makers are more particular about choosing grapes, specifically those low in sugar and high in acid. High-sugar grapes can produce too much alcohol during fermentation, which would require the final spirit be diluted with water to lower the high proof. Water blurs brandy’s fruity notes that become concentrated in the still.

In fermentation, only wild yeast is used, and nearly always both alcoholic and malolactic fermentations are done. Malolactic reduces the tartness of a wine by converting malic acid present into grapes into a more buttery lactic acid.

Brandy is made by Charentais distillation that begins with copper pot stills heated over open flames. Every spirit is distilled twice to a maximum ABV of 72.4 percent or 144.8 proof. For every 9 liters of wine that goes into the still, only 1 liter of brandy comes out. It’s a lot of work for such a small yield.

It’s always aged in Limousin oak barrels whose staves come only from the hearts of trees—the straightest grain of the wood. And how’s this for picky: Only 20 percent of the tree is used to make staves. Staves are seasoned for about one year before being formed into barrels, a process the French call bousinage. 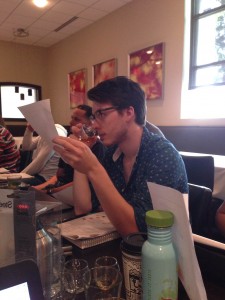 Jacob, a classmate and bartender at Mussel & Burger Bar, noses a Cognac.

Once barreled, brandy is aged in caves (pronounced “caahvs), cellars or above ground facilities to produce different characteristics. Brandy that’s aged above ground loses more water to the drier air around it, yielding a more alcoholic spirit. But in a cool (around 60 F), humid cellar, water stays in the barrels because of the airborne water barrier surrounding it. That allows alcohol to evaporate and produce a less potent but still flavorful spirit.

Once aged to the correct degree, barrels are blended and demineralized water is added to produce a single taste profile.

Once it’s finished aging, it’s watered down to 80 proof and bottled.

About flavors and such: The struggle with reporting on this class boils down to the challenge of taking good notes while sipping alcohol for nearly three hours.

Not only is our instructor, Gary Gruver, speaking quickly, so are my fellow students and I—usually at least one dozen per class in the room—making comments about what we’re tasting. It’s civilized but a tad noisy, not like a formal classroom setting, and that’s fun! My notes are typically incomplete, but in this particular class, they’re woefully bad.

But there are a few memories to draw on, mostly that great cognac and brandy tastes like the grapes from which they came. That yields amazing flavors and huge texture. It’s brown, but it’s not remotely like whiskey other than the expected wood flavors.

Fruit notes are lush and delicious, but more rounded than found in wine. Distilling polishes most of the rough, acidic edges off the spirit, and the texture and mouthfeel are marvelous. Neither silky nor velvety accurately describes how it lies on the palate; it’s somewhere in between. The finish is nearly uniformly dry, but not tannic. Flavors can be all over the board and always pleasant. Courvoisier, for example (Napoleon Bonaparte’s favorite) brought forth expected notes of wood, but butter and tobacco were a surprise.

A Martell VSOP Gruver estimated to be 12 years old was musty and nutty on the nose and amazingly soft in the mouth. A Courvoisier delivered cinnamon and dried fruit (much like bourbon), while a 10-year-old Hennessy offered up lush caramel backed by a solid punch alcohol.

The marathon tasting ended with Calvados, which is a brandy made from apples or pears. No notes on any of these other than, “Outstanding! Get this one.”