From Edible Louisville: A century ago, wealthy Americans — even Europeans — spent their leisure at secluded resorts and spas far removed from U.S. cities. 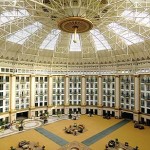 “These hotels were the Disney World of their time,” said Chris Bundy, author of West Baden Springs: Legacy of Dreams. “In those days, it was assumed that if you could afford to come to America [for vacation], you would go to French Lick. It was that well-known overseas.”

Connected by the Monon Railroad to the Midwest’s largest cities, the world’s sports and movie stars, power politicians and wealthy elite came to the area in southern Indiana to unwind, dine, gamble, golf and ride horseback.

But all that changed with the 1929 stock market crash and the dawn of the Great Depression. Worst hit was the luxurious West Baden Springs Hotel. Despite three high-flying decades in operation and its recognition by some as “the eighth wonder of the world,” its owners couldn’t find a buyer for the property. Ultimately they donated the massive and lavish facility to an order of Jesuit monks.

From InsiderLouisville: Louisvillians are rightfully criticized for thinking our town is the be-all, end-all portion of the Commonwealth. 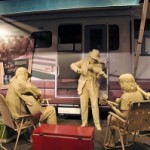 Great place, no doubt, but as I discover nearly every day, there’s so much more to the Bluegrass than what happens inside Jefferson County.

A perfect example of how little I know about Kentucky is what’s happening in Owensboro, just two hours away in Daviess County.

Nearly three years ago I called Karen Miller, executive director of the county’s convention and tourism bureau, to learn a little more about its annual International Bar-B-Que Festival (this weekend, May 11-12, in fact) and wound up learning much more about the town.

From Southern Living: Every spring, equestrian enthusiasts head to Keeneland, a historic horse track just outside of Lexington, KY to warm up with the first races of the season. Many 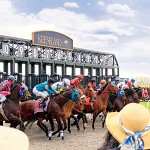 choose to stay in nearby Georgetown, a 20-minute drive north of the track to dine at the small town’s restaurants and browse through its art galleries. Plan your trip now, and look forward to a horse-filled weekend in early April.

Morning in Georgetown
Before heading to the races, start with coffee and a bagel at the Lock and Key Café Boutique. Housed in a former bank, the cafe also features local musicians and sells free trade art and crafts. Walk off breakfast with a self-guided tour of downtown (brochures are available almost everywhere), and admire centuries-old, meticulously preserved buildings and homes—some 300 of which are on the National Register of Historic Places.