It hardly seems possible that Angel’s Envy’s new Oloroso Sherry Cask Finish is the brand’s first release in five years–at least until you remember that the distillery proper just turned 2 in November. So much happens in this world of whiskey between new releases, single barrels, collaborations and whatnot that the gap certainly missed my notice. I wouldn’t have held it against AE anyway. It’s doin’ its own thang rather well.

So it came as some surprise when Wes Henderson, AE cofounder and chief innovation officer, mentioned the five year drought. And, as he usually does, he anchored his statement in his wholly believable brandspeak: We’re small. We take our time. We don’t get in over our heads. We rush nothing. 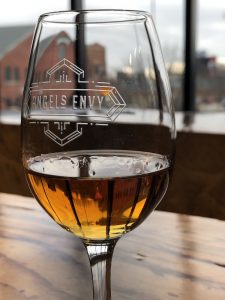 A sherry-cask finished Angel’s Envy nosed from a proper sherry glass. I like it. Photo by Steve Coomes

But since bourbon stories are rarely tasty without a little whimsy whisked in, Henderson and his two sons, Kyle (production manager) and Andrew (lead distiller) began the discussion of the Oloroso Sherry Cask Finish release by saying they’d nearly forgotten about those Olo barrels full of AE bourbon stacked in the back of the distillery. And when they rediscovered and thieved those barrels, the bourbon within was a magically different dram, a powerful and polished corn liquor kissed with customary sherry notes of raisins and nuts, and a silken mouthfeel.

“I said, ‘Holy crap, this is exceptional!’” Kyle Henderson recalled.

Frankly, I don’t care a wit whether this tale was made unnaturally tall in the way of Bourbon Marketing 101. This whiskey bears witness to the men’s claims. It is no ordinary bourbon.

Nor will it be available in ordinary supply. This, the first of its new Cellar Collection, is a Kentucky-only release of just 3,600 bottles. That number, Kyle Henderson said, would have been 3,800 had his daddy not insisted on such oft-repeated sampling.

NOSE: Bourbon leads with all its common goodness: fruit, rye, spice and oak. Surprisingly, the anticipated Sherry-esque notes of nuts, raisins and figs weren’t there (more on that shortly).

PALATE: Again, bourbon up front, with nuances giving chase: hazelnut, white grape, au de vie, graham cracker, vanilla and some white pepper announcing its proof: a tingly 100. The mouthfeel begins as lush and lubricious before drying nicely on the finish.

OVERALL: This is a sophisticated whiskey that’s made for sipping solo. Sure, it becomes even more silken with a bit of water, but its nuances are muted in the process. I see no need for ice. Ever. But in the hands of a great mixologist, I’m thinking miracles could happen.

Back to the nose … Since our tour and tasting ended early, we were offered another pour while we awaited lunch. This time the sherry influences leapt out of the glass: nuts, raisins and floral notes up front with vanilla and brown sugar bringing up the rear. Without my asking, two others in the group echoed my “second pour” experience. One even had the presence of mind to ask how long the first pour sat before we tried it. When told it was around 30 minutes, we decided (rightly or wrongly) that the rest likely let the sherry notes escape.

BUY OR BYPASS: If you’re an Angel’s Envy fan willing to spend $199 on the newest model, you’ll not regret it. It’s a terrific and beautifully finessed bourbon, a worthy member of this distillery’s unique lineup. If you’re a collector hunting for a truly hard-to-find bottle to pour for cherished friends or save for a child’s wedding day, all will love you for it. And with such a small release, it’s likely they’ll never have had it.

In an industry where so much great whiskey can be found for a fraction of this sticker, it can seem like a lot to pay. So, at the worst, buy a pour if you find it on a bar. But in a time when people spend hundreds and thousands of dollars on whiskey that–to my palate, anyway–isn’t as delicious as this, it’s arguably not so spendy.

BUYER’S INFO: There are two ways you can attempt to get a bottle of this: Members of Angel’s Envy’s 500 Main Club were offered early reservations for a chance to land one come February 12. If you’re in the club, you’re one of a reported 5,000 members. So do the math on your odds to get a portion of the Club’s allotment.

Come February 15, the remainder of the allotment will be released at the distillery and at select Kentucky retailers. Even at $199 per bottle, I can’t imagine this will last long (but I’ve been wrong before).