The Four Roses LESB broken down to its four parts for a media tasting. Photo by Steve Coomes

If you’re not a bourbon wonk, know that this is a high-demand item whose $140 MSRP will likely not be seen outside its distillery gift shop sales. Expect retail prices to be jacked way up; secondary costs to triple or more.

But since you haven’t tasted it and I have (review forthcoming), I can tell you this much: Get one if you can. It might be my favorite Four Roses release ever, and that’s saying a lot given last year’s remarkable Al Young 50th Anniversary release.

The LESB will be available in limited quantities at the Four Roses Distillery Visitor Center in Lawrenceburg, Ky., and its Warehouse & Bottling Facility Visitor Center in Coxs Creek on Saturday, Sept. 15 beginning at 9 a.m. It will then roll out to additional select retailers in the weeks following.

I don’t know what the policy is for lines forming early outside for these events, but I once met a man in line who’d driven from Michigan, arrived at 4 a.m. and waited in line all morning. Wouldn’t surprise me to see some tent dwellers show up.

The distillery is using the bottle’s release to toast its 130th anniversary, an incredible milestone for a brand that’s weathered some tough ups and downs.

According to a news release, four of Four Roses’ unique Bourbon recipes were selected for this bottling. This bottle will feature a 10-year-old Bourbon from the OBSV recipe, a 13-year-old OBSF, 14-year-old OESV and 16-year-old OESK. 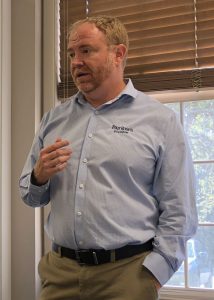 “For this Limited Edition Small Batch, I wanted to create something very special to celebrate the 130th anniversary of our brand,” said Four Roses master distiller Brent Elliott. “From the beginning of the process, I focused on building around the unique fruit flavors in our F and V yeast strains, and these flavors shine through in the finished product. As a contrast, I also included a spicy, older batch. By mingling these different flavor profiles, I think we achieved a wonderfully balanced, complex and unique Bourbon. I could not be happier with the result and can’t wait for you to taste it.”

This morning, Elliott led a small group of reporters through a tasting of each of the four bourbons in the batch, followed by the finished mingling. It was an extraordinary look into how the LESB is crafted.

Bottled at barrel strength, 108.3 proof, the 130th Anniversary LESB offers rich vanilla, raspberries and ripe berries, and crème brulee on the nose. As it hits the palate, it opens into flavors of apricot, mint, cinnamon, apple and mellow oak. This Bourbon boasts a very long finish, with hints of cinnamon, more fruit and vanilla.

Trust me, this is a short list of the flavors you’ll find in this bottle. I got many of those plus others.

Four Roses will distribute approximately 13,140 hand-numbered bottles, which is a sizeable increase over recent years’ releases. So your chances of getting one have improved.