If you’ve never heard of the Spirits of French Lick distillery, here’s a tip for you:

Go there. Make the 75-minute drive from Louisville—a bucolic tree and farm-lined route—to the distillery within the French Lick Winery complex. There, head distiller Alan Bishop plies his trade and is doing remarkable work.

After more than two years, he’s releasing his first bourbon, Lee Sinclair Four Grain Straight Bourbon Whiskey. I tasted it (along with an extensive line of upcoming brown-spirits releases) this spring, and it’s remarkably good at only 2 years old. Can’t imagine what the barrel will do to it as time wears on. Here’s to hoping we’ll see subsequent releases at years 3, 4, 5, 6 and on.

Second tip: Regard craft distilleries and their products the way you’d look at independent restaurants. Fans of particular chefs frequent their establishments because to enjoy their unique twists on the food. Bishop and other craft distillers do the same by not only following their bliss, but by distinguishing their spirits from brands made by larger, globally known operations. How else do you get known in this biz if your product isn’t different?

In Bishop’s case, French Lick’s spirits are crafted to lead with grain flavors, or, in his words, “present grain forward.” The point is to let the drinker taste the source materials as much as any flavors created in distillation or gifted from the barrel.

He succeeds with Sinclair—named after the businessman who purchased the original Baden Lick hotel and transformed it into the West Baden Springs Hotel.

Third tip: Go visit this amazing hotel if you’ve not. You’ll be astonished by its beauty and a little ticked off it’s taken you so long to get there. It’s one of the most remarkable buildings you’ll ever see and one of the best hotel secrets in the country. 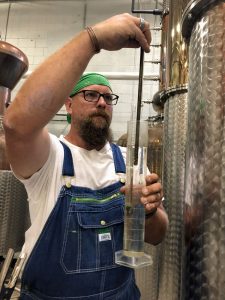 Back to the spirits: Some great tidbits from a news release about the Sinclair …

My impressions: On the nose comes loads of grain and fruit—a fruit salad of ripe peaches and bananas—backed by a bit of spice and alcohol that hints of unexpected potency for a 90-proof drink. On the palate it’s a softy from front to middle; grain notes arrive backed by light caramel, browned butter and toasted oak. The spice found in the nose arrives on the finish: a pleasant tingle that disappears quickly while leaving traces of tannin.

This whiskey, like others of Bishop’s I tasted, comes on in layers, deepening in complexity with subsequent sips. I recommend this be enjoyed in a 2-ounce pour so you can experience the change as you sip more of it. It’s also light bodied, so water or ice do it no benefit. If you must drink it cool, chill it several hours in the fridge.

I also learned by accident that it opens up slowly. I poured myself a splash one evening and forgot about it for five hours. After that lengthy open-air rest, it was amazingly fruit forward, offering up lots of dark cherry and candied orange.

For the time being, Lee Sinclair will be available at multiple retail locations in Southern Indiana, as well as at the French Lick Winery and Vintage Café gift shop. Soon, the Spirits of French Lick will offer an eCommerce platform for product purchases out outside Indiana. Bishop told me recently that achieving Kentucky distribution is a near-term goal.

If you’re convinced you need to visit, know that the distillery has some great aquavit, absinthe, Old Tom gin (this one’s a dandy in any gin cocktail) and brandies (Son Roho, blackberry eau de vie and apple brandy). The winery’s tasting bar is an adventure as well.

UPDATE: Seelbach’s, a craft spirits website, is conducting a presale for the Lee Sinclair. Check it out by clicking here.

After more than three years, he’s releasing his first bourbon, Lee Sinclair Four Grain Straight Bourbon Whiskey. I tasted it (along with an extensive line of upcoming brown-spirits releases) this spring, and it’s remarkably good at only 3 years old. Can’t imagine what the barrel will do to it as time wears on. Here’s to hoping we’ll see subsequent releases at years 4, 5, 6 and on.