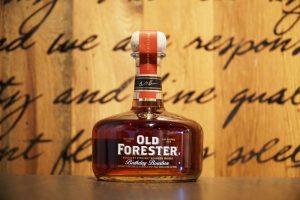 Fancy gettin’ you some? Be prepared to spend more than the $99 MSRP, not to mention ready to wait in long lines if you lack liquor store connections. But if you do get it, drink it. These releases are often remarkable.

According to a news release, this is the first Birthday iteration to be bottled at the new Old Forester Distilling Co., located in Louisville’s historic Whiskey Row, the spot Old Forester called home before Prohibition.

Selected from a single day of production and handcrafted by master distiller Chris Morris and master taster Jackie Zykan, this small batch bourbon offers a one-of-a-kind character and flavor profile that will never be replicated. A total of 120 barrels, distilled on June 9, 2006, were marked for this year’s Birthday release. They were drawn from two locations: 93 barrels matured together on the 3rd floor on the northwest side of Warehouse J; the remaining 27 barrels matured together on the 3rd floor, northwest side of Warehouse I. The angels opted for a hearty share of 2018 Birthday Bourbon, leaving a total yield of just 39 percent. Five barrels were found totally empty.

At 101 proof, this Birthday release is the most potent yet. Roughly 2,400 (six bottle) cases will be available for purchase nationwide.

Old Forester’s nosing and taste notes: Mahogany in color, the nose on 2018 Birthday Bourbon delivers a pronounced dark cherry cobbler note that opens into a dynamic build of caramel and dark chocolate covered smoked almond with hints of charred oak. A touch of herbal lemon tea, sweetened with a touch of honey, round out its depth of character. The tasting experience is multi-dimensional, with subtle sweetness that blossoms into warm and green-spice, brightened by lemon honey and followed by cherry cobbler. The finish is long and dry, with an herbal lemon honey sweetness.