Start stroking your whiskey retailer connections now, because you may want this.

If you know the story of the Heaven Hill Springs Distillery fire in 1996, you’ve likely done the math to calculate that this whiskey was produced at before that. According to a news release, 41 barrels used in this upcoming bottling were produced in 1989 and 1990. 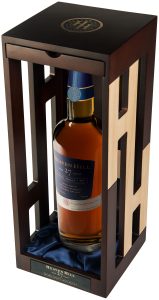 Each bottle of the 3,000-unit release will be priced at $399—not all that extraordinary given the bourbon’s age and the outlandish prices Paid for younger whiskeys on secondary markets.

Some cool notes about this whiskey:

Each 750ml bottle comes in a custom-made wooden box lined with blue satin. The box’s exterior bears a pair of Hs on each side and it’s secured with a magnetic closure. The distiller’s notes label features hand-written bottle numbers, tasting notes and DSP-KY-31, denoting the Old Heaven Hill Springs Distillery.

This one-time release is available only in limited markets for a suggested retail price of $399.