If you stand on the Main St. sidewalk with your back to the new Old Forester Distilling Co., you’ll see George Garvin Brown’s picture painted on the east-facing wall of Merle’s Whiskey Kitchen. From that angle, Brown’s fixed gaze peers over your head and at the 19th Century brick edifice behind you, which long-ago housed Brown-Forman’s offices. 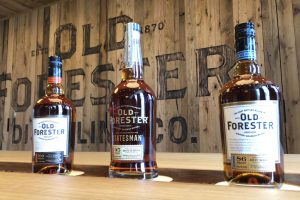 The distillery’s third floor provides a better view of the static, stoic Brown: you’re now eye-level with the black-and-white image, and it seems, silly or not, wherever you go on premise, Brown’s eyes are ever watching this rebirth of his bourbon creation, a whiskey many regard as unimaginably underappreciated.

Just two years from its sesquicentennial birthday, Old Forester’s case sales remain vastly overshadowed by its 22-year-old sibling, Woodford Reserve. And compared to Brown-Forman’s mega-brand, Jack Daniel’s, the world’s most popular whiskey, which it purchased in 1956, “Old Fo’s” total inventory is a mere splash on the floor.

Yet loads of Louisvillians and spirits pros in the know claim it as a favorite beloved for its bargain price, back bone of spicy rye and accents of stone fruit and caramel. Though I have yet to find a bartender who doesn’t love it, the dozen or so Brown-Forman employees I’ve asked about it will acknowledge their preference for it over Woodford only in hushed whispers. Seems that all public praise—unless one works specifically for Old Forester—is saved for the brown spirits found in the slumped-shoulder bottles filled in Versailles, Ky.

Now, however, it appears Old Fo’ is getting its proper due. Seventeen years ago, B-F, began extending its product line, albeit cautiously. To the reliable line of 86-proof proof standard and the stellar 100-proof Signature came Birthday Bourbon. This was a whiskey B-F master distiller Chris Morris said at a recent

press conference, “used to be something we couldn’t give away at $39,” but today people wait in long lines to pay triple that price. Fourteen years later, Old Forester launched the first of its four-expression Whiskey Row series, a lineup that has been wildly successful.

Then, four years ago, B-F announced plans to build a distillery in the very spot where Brown-Forman set up its downtown offices in 1882: Whiskey Row, where 89 other booze-related businesses operated. That distillery opens today, and if you’re a whiskey fan, you’re going to love it.

Old Forester Distilling Co. is the finest example of a purpose-built tourist distillery in the state—and that’s saying a lot given the likes of flashy, full-production facilities like Kentucky Peerless Distilling and Angel’s Envy just blocks away. Why? Because no distillery in the country has a working cooperage on premise except this one. When bourbon gets 100 percent of its color and 50 percent of its flavor from the barrel, it’s about time someone figured out out how to make barrel coopering the pièce de résistance of an actual distillery tour. (Check out my short video of the charring process on my Facebook page, and make sure to have your sound on.) 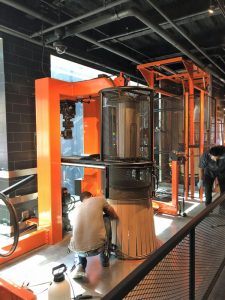 Coopers hand assemble barrels to be filled with whiskey distilled on site.

The reality is such a feature is prohibitively expensive. The specific and uncommon machinery, ventilation and labor required to create such a working exhibit surely claimed a sizeable chunk of the $45 million cost of the project. But when you see it in action, you’ll deem it shareholder money well spent.

The rest of the tour is much like others’: a story told with ample visual and palpable cues, concluding with a whiskey tasting. All good stuff, necessary parts of the experience.

The heart of the distillery is a 44-foot-tall, gleaming copper-clad column still approachable via a stroll through the gift shop (naturally) and a short ascent up a series of stairs vaguely resembling a Gothic church altar. The visual message is clear: this is a working distillery, and you’ll see how whiskey is made.

About 100,000 proof gallons of Old Forester will be distilled here, but all its mash will be cooked at Old Forester’s larger Shively distillery. Once cooked, the mash is moved to the 119 Main St. distillery where it’s fermented and distilled. According to our tour guide, about 20 percent of Old Forester’s annual production will derive from Whiskey Row. (Update: According to WDRB.com, brand president Campbell Brown wants to boost business to 1 million cases, a five-fold increase over now.)

Within its 70,000 square-feet are four, 4,500-gallon fermenters and a 900-barrel rickhouse in the building’s rear. To understand the difficulty of setting up a working distillery and cooperage in a tight, urban space never designed for such occupancy, filled barrels weighing more than 500 pounds each must exit the front of the building, be loaded onto a flatbed truck and then hauled around the block to the back of the building where they’re stored for aging. At a production snail’s pace of about 15 barrels a day, the rickhouse will be filled in roughly six months. (For comparison, Jim Beam’s Booker Noe Plant in Boston, Ky., produces 1,500 barrels daily; Heaven Hill, 1,300.)

Visitors will see a sophisticated modern bottling line as well, one filling 15 bottles per minute—less than one-tenth the speed of B-F’s Shively bottling operation.

Though Old Forester Distilling Co. will be the site of private single-barrel selections and where many of its special releases will be made, its creation wasn’t only about having a new production site. Such an operation could have been built for far less than what the company spent on the Main Street site.

The new distillery is about driving consumer education, increasing brand awareness and adding fuel to the fire of bourbon culture. It’s also a statement that the bourbon boom is far from a bust, and that it’s time to celebrate these halcyon days. 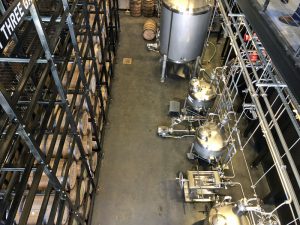 From the top of the rickhouse one can see barrels in aging and the distillery’s blending tanks.

To Fo’ fans like me, this also about a prized brand getting its due: a home bearing its name and a high-profile location where others can learn just how good this whiskey really is.