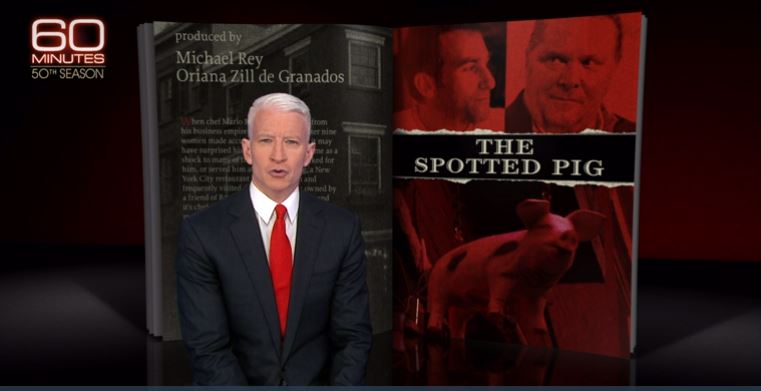 For years, industry talk trickling southward said you were a bad boy. But until last night’s episode of “60 Minutes,” I had no inkling of just how bad. I’d heard stories about what men in the restaurant industry call normal horseplay, but I’d never heard the debased tales of what viewers of the nation’s most respected news show heard last night:

But it was all in fun, right? Just life in the restaurant biz; stuff that happens.

Or was it more a power play, say your right as an employer to paw whomever whenever?

I’m not motivational expert, but I’m not seeing that as a staff morale booster, Mario.

No wonder they nicknamed you the Red Menace.

Seems like your buddy, Ken Friedman, owner of The Spotted Pig, thought he was entitled to it. According to the women interviewed, he simply preyed on who he chose to and dared those women employees to retaliate; blackballed them if they quit to work elsewhere.

Reckon what clever nickname Friedman got?

On second thought, I don’t want to know.

For those who don’t follow the restaurant industry closely, this merely is the tip of the iceberg when it comes to the rampant problem of sexual harassment. Batali and a handful of other star chefs are just the famous ones. It happens at every level of the industry.

Harassment was common when I was in the biz: lewd remarks and groping—and that was just the women on the men—which dudes didn’t seem to mind or didn’t claim to. That wouldn’t be macho. Happened even to me: two different women and one gay man. Strange and alarming every time.

Of course, that was small potatoes compared to what men did to women: the endless remarks, the constant bumping into and pawing, the cornering in cramped spaces, the creepy leering, the “Oh, come on, let’s go out, get some drinks, smoke some pot, you and me, baby,” variety of perverted nagging.

But I never saw or heard of what was mentioned in the 60 Minutes piece. Ever.

And I never saw it from the owners I worked for. Ever.

Did they know it was happening in their restaurants? I can’t say for sure. I know for certain that I never heard a woman on staff say they any owner did or said anything like what Friedman and Batali are accused of. I think they were (and still are) decent, high-integrity men.

Call me lucky, I guess, because I’ve read a couple of dozen books by chefs and restaurateurs who remark casually—sometimes triumphantly—about the sex, drugs and rock and roll culture of restaurants.

Reckon if they’re wondering now whether they should have written those stories?

But all that’s starting to change, especially with the momentum triggered by the #metoo movement.

Such change is long overdue, and as abused and harassed women speak out, stars like Batali will fall from the foodservice firmament. And there will be hell to pay.

WATCH THE EPISODE BY CLICKING HERE.