Despite what you may have seen during coverage of the Kentucky Derby Deluge of 2018, Churchill Downs is a great place: historic, storied and manicured like an English garden. It was especially nice on the Wednesday before the big race, when the crowd totaled only 30,000–one-fifth of Saturday’s sodden mob–the sun shone brilliantly and the lines for anything were short.

It’s hard to improve on that setting unless you’re invited to the Woodford Reserve suite perched four stories above the finish line. That’s what the brand did for about a dozen Louisville-based spirits writers who got to taste its new Kentucky Straight Malt Whiskey to be released in June.

Master distiller Chris Morris and Elizabeth McCall (recently re-titled from master taster to assistant master distiller) led the group through a tasting of the brand’s standard expression, its Rye and its Double Oaked in the run-up to the Malt. Before and during the presentation, Morris did the usual slathering on of details, talking up mash 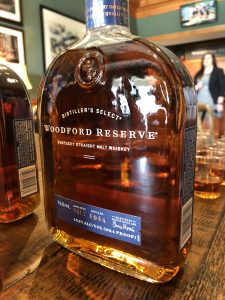 bills (Brown-Forman, he claimed, is the only large distillery in the U.S. that uses grain malt only, no supplements for its enzyme contribution), barrel toasting vs. charring, city water vs. aquifer water (which Woodford has and uses), distillery history (dude’s a wonk who made a particular historic municipal sewage tale interesting) and the recent collapse and replacement of one of its three goose-neck pot stills.

“It’s just part of our story, it’s what we do, and it’s all part of our commitment to quality,” Morris said, pinching a tasting cup of whiskey between thumb and forefinger.

Woodford’s standard bourbon has never been a favorite of mine, but that’s clearly not hurting sales. The Rye is a different story: love it. It’s not only delicious, it stood a torturous third in line of the four whiskeys poured for tasting.

Prior to the rye was the Double Oaked, a whiskey I’ve enjoyed at the distillery and did again at Churchill–but never as much at home.

Why not? I figured that out at this tasting: When I’ve sipped it at formal tastings, the whiskey had rested many long minutes in the glass before consumption, and that softens this whiskey’s prominent oak notes. Note to self: Be more patient and walk away after pouring.

The Malt, you ask? Different, yet really cool. Born of a mashbill of 51 percent malt, 47 percent corn and 2 percent rye, it’s as soft as you’d expect. Not to mention malty: very grain forward on the palate, though not on the nose (remember, this was a small amount we were evaluating). I’ve seen Scotch flavor wheels including the descriptor “kippery,” and I always wondered how that would present itself. Indeed, it came to mind with the first taste: barely fishy before sliding pleasantly into common whiskey notes. When I trotted out “kippery” as though it were on my mind all along, a guy standing nearby said, “You’re right. It tastes a little like a fish oil pill.” He, too, found it really intriguing.

We were encouraged to have more if we liked, but the day was young, the tasting was generous and whiskey in the Woodford Reserve suite is free, so no need to rush. The June release is, after all, just around the corner, and we Kentuckians will, of course, get our crack at it first. Further investigation will ensue then.