When three partners announced plans to rehab and reopen the legendary Old Taylor Distillery Co. in Millville, Kentucky, they believed they could do it by late 2015.

Well, not the whole thing—the multibuilding campus is massive—rather a boutique distillery on the property that once was the most lavishly appointed whiskey distillery America had ever seen. 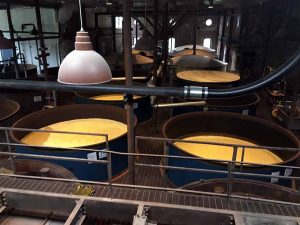 Turns out that even those modest aims were ambitious. The distillery, some said, was in post-apocalyptic condition, a mere shadow of its original grandeur. Opened by Col. E.H. Taylor in 1887 and operated by National Distillers from 1935 to 1975, The Old Taylor Distillery Company lay idle for four decades, and nature was reclaiming the site with a vengeance. Water maples were growing inside office buildings and flower gardens were so densely covered by overgrowth that reclamation crews didn’t discover their concrete sidewalks and fountains until bulldozers cleared the mini-jungle. A four-story rickhouse the length of two football fields was so heavily cloaked in vines that some visitors weren’t aware it was there.