Earlier this summer, Barton 1792 Distillery released a limited-edition bottle of its namesake 1792 bourbon to celebrate the 225th anniversary of Kentucky joining the United States. I had the rotten luck to be on vacation and miss the press event in Bardstown, but the good folks at Barton made sure a sample was delivered to my office after I returned.

And they are good folks, not just because they’re generous with their whiskeys. If you’ve not toured this this amazing and old distillery, you’re missing out on a glimpse of history that’s slowly being modernized to keep up with pressing demand for its products. For now, tours are free, fairly lengthy and among what I like to call “the dusty and gritty tours,” which give enthusiasts a firsthand impression of the non-glamorous side of whiskey making. Nothing at all against modern, streamlined facilities, I like them also. But tours like Barton’s, its big sister, Buffalo Trace and Four Roses hold special places in my heart. 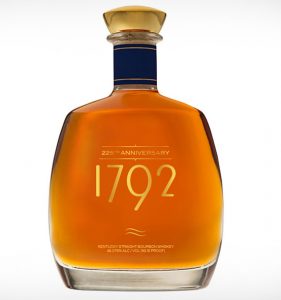 But ‘nuff said on that. Let’s talk about this whiskey.

A quick glimpse at the bottle shows a blue neckband that mirrors the color of the Commonwealth’s flag, and a proof of 92.15 (46.075 ABV), which is a tad lower than the standard 93.7 proof (46.85 ABV) bottling. Other than that, the only difference you’ll find in stores—if you can find this Kentucky-only release—is the price: suggested is $35.99 (about $6 to $8 more than the standard pour), though secondary market sales have pushed it modestly north of that.

According to the distillery, a small batch of barrels aged 10 years at Barton were dumped for this release. It is the sixth limited-edition release of 1792 Bourbon expressions, joining the High Rye, Sweet Wheat, Port Finish, Single Barrel and Full Proof Bourbons. (For all you Port Finish fans, I saw loads of those barrels aging in a Barton warehouse earlier this winter. So expect that whiskey to be re-released in the future.)

I first tasted it in June, and for whatever reason—I’m sure it’s not the modest 1 proof difference—this whiskey, sipped neat, seemed softer than the standard 1792. Somehow its typically prominent rye character shifted into the background, which is neither good nor bad, just different. All by itself, it’s a delicious pour I think any bourbon fan would like.

But shortly after my first sips, I added a couple of cubes of ice and the flavor was notably subdued. The spicy, oaky roundness was all but gone, leaving a whiskey without its usual complexity. Same result starting with it neat and adding a few drops of water. Added to an Old Fashioned, it was just, well, there, not asserting itself as hoped.

To be fair, my mind is recently and deliciously imprinted by the significantly spicy 1792 Full Proof Single Barrel selection, a near-cask-strength barrel pick in which I took part last winter. That 125-proof liquid is the boss in a cocktail, stands up to rocks without dissipating and, before it got some good air in the bottle for a month or two, was almost too tough to tame sipped neat. It’s since calmed down nicely and now presents more caramel than rye sizzle; the beast has mellowed nicely.

The thought of beneficial air time then sent me back to the Barton 225th. Half consumed, it too had been exposed to some air, which made me curious to see whether that altered its flavor. Bottom line is it became a better neat sipper, somewhat fuller bodied and delivering more campfire and orange than I’d noted in the first several samples. In every respect, it was more of a good thing.

But I also got more of the same after adding rocks, making cocktails, adding water, the usual test drill, and it was again subdued in every application.

The verdict? It’s a great neat sipper, and one that, ironically, befits its connection to Kentucky’s heritage. When the Bluegrass State joined the union 225 years ago, no one here was sipping whiskey on the rocks or making Old Fashioneds, they were drinking their bourbon neat. So let’s call this one “bourbon sipped as it should be.”

As I said, if you can find it, get it and drink it. You’ll not be sorry.