Every Louisvillian knows what and where Millionaires’ Row is: the upper-upper deck at Churchill Downs where, as the name implies, where the wealthy gather to eat, drink and wager stacks of cash on unpredictable and pampered steeds.

But while locals know of this lofty perch, few have ever been there, including me, until last Friday night. Hoping to promote its Guest Chef Series, held on Fridays during its Downs After Dark races, some reporters were invited to take in the experience. Far as I could tell, only three of us accepted: one online reporter (me), one from print and one from TV. Those who skipped it missed a pleasant evening on someone else’s dime.

Flash the guest ticket to Millionaires’ Row suite 6, known as “Mil 6,” to track employees, and an escort walks you to the elevator, past the stairs and escalators created for non-Mil 6 folks. Once arrived, if you walk through the dining room and to the outdoor standing-room-only observation deck at Mil 6, it’s immediately clear why that elevator is preferred: you’re at least 60 feet off the ground. Regardless of how well you see, the height leaves you wondering what and how the little people down below are doing.

“It’s making me a little dizzy to look down,” a woman near me said. “I’m going to ease away from the rail. Step back. Step back.” 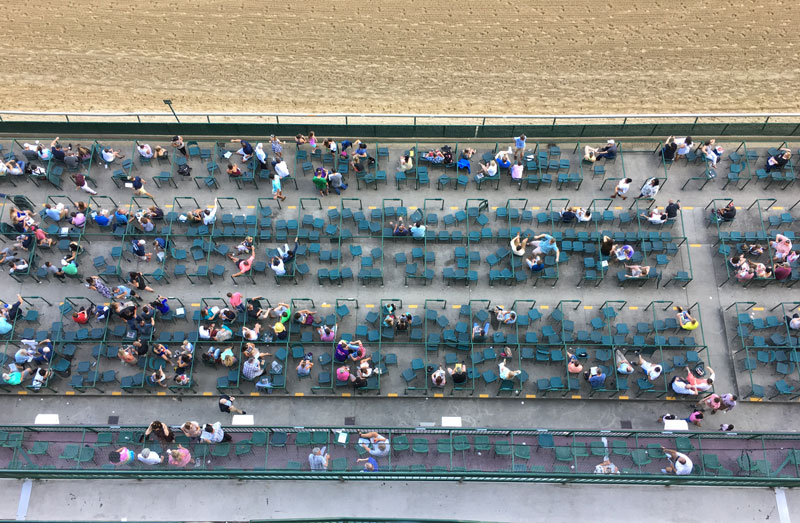 Looking down from Millionaires’ Row, you can’t tell what the “little people” are doing. | Photo by Steve Coomes

The Guest Chef component of the evening saw Harvest executive chef Patrick Roney serving a dish he calls Three Little Pigs. Portions of pork charcuterie, cured belly and smoked pork shoulder were served atop tomato bread, greens and biscuits respectively, and Roney got to tell guests how he made it. Naturally affable, it’s clear Roney likes the interaction—or perhaps he’s just happy to be free from the confines of the spot in which he spends 65 hours a week. Either way, guests liked him and his food.

“It’s just fun to get out, be out, doing something different,” Roney said later. Leaning over a handrail and smoking a cigarette on the observation deck over the track, he added, “You can’t see this from a kitchen!”

The rest of the buffet was laden with dishes of seared beef, sautéed shrimp, and seasonal salads of blends like tomato and watermelon, and butter bean and radishes. Drinks are included in the price, which allows access to a modest bar, or a trio of tickets to a Finlandia Vodka-sponsored bar where, on that evening, Harvey Wallbangers (vodka, orange juice and Galliano) were on offer.

Before visiting Mil 6, I only half tried to imagine what such a suite would look like. Would the wealthy insist on heavy curtains with gilded edges, Victorian high-backed chairs and carpets so comfy they felt like the 13th green at Augusta National?

This was far more casual. The night’s theme was a sock hop: tables decorated in black-and-white checked cloths, chairs sheathed in poodle-skirt covers, plastic LPs dangling from the ceiling and ‘50s rock throbbing through the sound system. 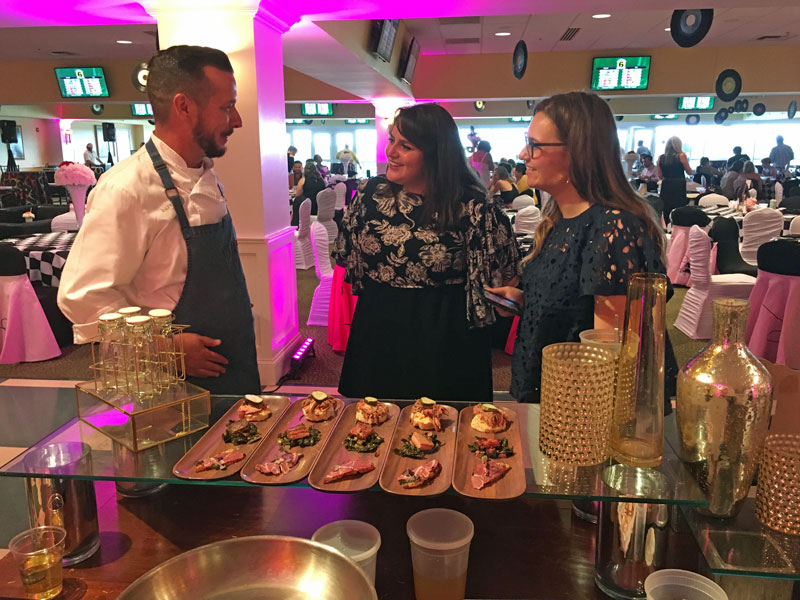 And though I can’t say I could spot a millionaire from a distance at any location, most everyone there looked, well, like me: ordinary, modestly dressed up, happy to devour delicious food we didn’t cook from dishes we’d not wash and have drinks made at our whim. It surely was better up there, where the cool, gentle breeze never ceased, than among the throng below, gobbling down heartburn-inducing hot dogs and scoping out shelter from a rapidly approaching thunderstorm.

Perhaps the true millionaires show up only during Derby Week, when their horses are the ones on whom they bet—at a private counter located a few paces from the buffet, of course. On slower nights, such as this last day of June, when less-esteemed ponies circle the dirt track below, the hoi polloi can enter if their expendable income can support a $149 splurge.

And why not? You only live once. Add a trip to Millionaires Row to the bucket list. You won’t regret it.