Pride that my job allows me to sample such amazing liquor regularly and for free; but prejudice that such an old offering will be an oak bomb, a ponderous and off-putting punch to the palate that makes you long for a taste of youth.

The latter was not the case for Lost Prophet 22 Year Old Kentucky Straight Bourbon Whiskey (90.1 proof). Just opening one of the most amazing press kits I’ve seen in my quarter-century career implied I was in for something special. 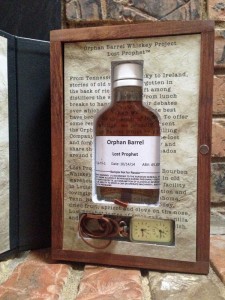 The sample druggist’s bottle came complete with a railworker’s watch.

As it poured from the bottle, the aroma marched straight to my nose—from a full 18 inches away. This latest release in Diageo’s Orphan Barrel Series didn’t need swirling to release the bloom of citrus, cooked sugar and vanilla into the still air of my small office. But when I did give it a twist, I was rewarded with ripe fruit, dried cherry, a bit of leather and old barn wood. A touch of acetone and esters followed, but nothing offensive. It’s old whiskey, for heaven’s sake! You expect a few wrinkles.

Held to the light, its color is deep: a blend of cured tobacco and golden highlights, hues of maturity, all inviting.

The first sip was clean, surprisingly light bodied and not overly oaky or smoky; the finish was dry but not overly so. Exhaling brought char to the fore and some smoke, notes that moved on their own front to back across my palate without ever dominating it.

Another sip lingered, tingling the roof of my mouth while leaving a creamy texture mid-palate. The combined caramel, white pepper and generous citrus was almost candy-like.

And it only got better with subsequent sips: scant dried berry and hint of cocoa, even some notes of dried grasses. I emptied my glass and let it dry, and even an hour later the Prophet’s ghost lingered in aromas of mash, brown sugar and allspice.

Among the Orphan Barrel series (all are curated from Diageo stocks, but this was distilled at George T. Stagg [now Buffalo Trace] in Frankfort, Ky., in 1991 and later moved to Stitzel-Weller in Louisville, Ky.), the only one I’ve not had is Rhetoric (and I’ll get to that soon). I loved the creamy-butterscotchy Barterhouse and its $80 price point wasn’t horrible (for collectors) either. Not only did it lack none of Old Blowhard’s brash wood notes or palate-dominating properties, it didn’t demand its $150 price.

Lost Prophet fits right in the middle on price and taste. I liked it better than Barterhouse, preferred its leaner, more distinct texture and noticeable complexity. Like Robert Redford’s rugged good looks, it’s easy to appreciate the age etched into a Kentucky whiskey held in wood so long. I accept its slightly rough edges as character and uniqueness accumulated over time. 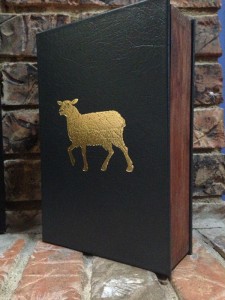 The oak case was a nice touch as well.

Like the many seers who roamed the deserts of biblical lands, Lost Prophet is, so far, a loner among the Orphan Barrel group, a one-of-a kind bourbon whose audience is worth seeking.