TEQUILA, MEXICO–Most spirits tastings are pretty standard: Someone explains how they’re made, how they’re aged, what aromas and flavors to look for—and then you smell, taste and savor. 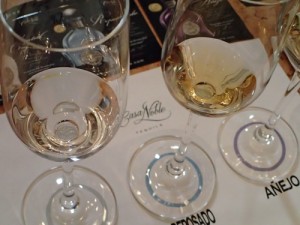 Shattering that standard into a thousand pieces is to enjoy a tasting at the actual distillery—such as in the barrel aging room at Casa Noble Tequila, in Tequila, Mexico.

And have the master distiller, Juan “Pepe” Hermosillo, lead the tasting, teaching about the climate and granular soil that make blue agave largely rare outside of the country.

In near-perfect English he leads us through sips of silver, reposado and anjeo, and the expected oohs and ahhs follow. It’s really good stuff.

Then he stands, grins almost mischievously and adds, “But I have one more surprise for you,” and he directs us to a row of barrels. Atop one barrel is its removed bung beside a crystal thief, which Hermosillo dips deep into the barrel.

“This anjeo has been aging five years in a 300-liter barrel,” he begins. “We’re trying some fun things. We want to see what flavors we’ll get from this extended time.”

The anjeo is more golden than the distillery’s standard 2-year-old anjeo tasted moments before, and its full body makes nearly no noise as it leaves the thief and accumulates in our glasses.

No oohs and ahhs at first, just slow blinking and big smiles. “Wow,” one of my colleagues says, summarizing for all of us. 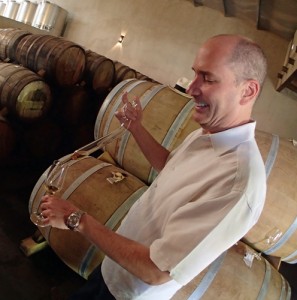 He offers a second taste and no one refuses. It is the best tequila I’ve ever had.

Then, putting down the thief, Hermosillo says slowly with an even wider grin, “But I have just one more surprise for you. Come this way.”

Gesturing with his head, he motions us toward a large coffee table bearing a lone bottle of deep amber-gold tequila.

“We poured this out a little earlier, and it came from this barrel,” Hermosillo says, pointing to a vessel much smaller than the last. “This also has been aged five years, but this is a 100-liter barrel, which, I think you’ll notice, imparts much more flavor. It’s much more complex.”

Complex is too tame a word. The “juice” as another colleague on the trip calls it, is as big bodied as a linebacker, yet rolls across the tongue soft as silk. Every standard note comes through loud and clear: wood, vanilla, agave, cinnamon, caramel, honey … and then smaller notes, lavender, citrus, faint herbs.

“Can I have another taste?” I ask, and Hermosillo quickly obliges.

I’ve never tasted a spirit this good, this balanced, this freakishly soft and so devilishly seductive. Including the tequila sipped in our tasting, most of us have sipped at least 3 ounces, and it’s not even lunch time. And we had at least that much the night before.

Yet Hermosillo offers yet another splash, and I oblige, my glass held out greedily. 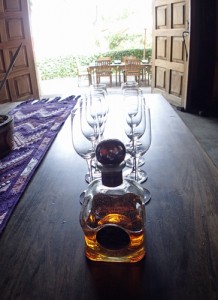 The best tequila I’ve ever had, a five-year-old anejo from a 100 liter barrel.

The group starts shuffling toward a table outside already set for lunch. With some five-year-old still tequila in my glass, I don’t move a muscle. Nor does Aaron, another reporter on the trip about twice my size who knows what he’s drinking and has more body mass to absorb the amount he’s consumed.

“She left some in her glass,” I say to Aaron, pointing to what must be a full ounce abandoned by another reporter who declared, “I’ve had enough,” a moment before.

When his eyes dart to the woman and back to her abandoned glass, I know either he or I will claim it momentarily. “There. Is. No. Way. That’s. Going. To. Be. Wasted.” I tell myself, so I wait and continue sniffing sipping, picking up a hint of banana, some surprise vegetal notes and a dash of brown sugar.

Aaron tips his glass back, empties it, looks at me and says, “Lunch!” and walks toward the open door. As he steps outside, he says excitedly, “Cocktails!” takes his seat before a clever mango margarita and lights a cigarillo.

I’m now alone in the darkened corner of the barrel room, admiring the last of the long, sticky legs stretched out inside my now-empty glass. It’s peaceful here, nearly quiet save for the tequila-giddy conversation of my colleagues drifting in from 10 yards away.

I eye the abandoned ounce and think, “What’s tackier? Finishing someone’s abandon tequila, or abandoning tequila that, when bottled, might fetch $200 for a 750ml?”

The answer lies somewhere in between: I take the woman’s glass and pour her neglected tequila into mine, begin sipping anew and head out to lunch.