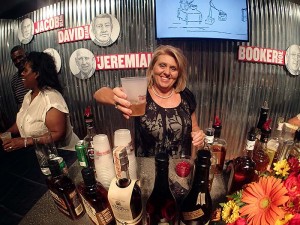 Drink up! A great night at the Bourbon All Star Sampler, part of the Kentucky Bourbon Festival held in September.

Noooobody should buy whiskey stones! (Sing it like Dylan and you’ll get the joke.) On a recent tour of Very Old Barton Distillery in Bardstown—I recommend it highly—I browsed the gift shop and found what are called whiskey stones. These are small squares of smoothly cut soapstone that, when made cold by hours in the freezer, are supposed to cool your whiskey—or any other spirit you like to drink neat—without diluting the spirit as does melting ice.

OK, I’ll admit, we’d been tasting really good whiskey and my buyer’s cynicism was low, so I fell for the idea.

I’m sorry to report that they’re pretty much worthless, plus they look weird in the glass. Another bourbon drinking friend confirmed my findings. “They suck, I don’t care what anybody says,” he said.

Granted, there are better ways to make large ice cubes that don’t melt as fast, but I haven’t bought those molds yet. I will, however, and report back.

A fine party with fine bourbon: I bought the whiskey stones during the Kentucky Bourbon Festival, a six-day 49-event celebration of all things bourbon in Kentucky.

The city of Bardstown, home to just 13,000 people, does a magnificent job of running the festival, which in its 22nd year, drew an estimated crowd of 60,000. Before the even week began, every ticketed event was sold out.

While there, I met people from all around the country and a few from outside the country, bourbon fans and aficionados who love the spirit and the culture that created and still supports it.

During the Bourbon All-Star Sampler, where master distillers are treated like rock stars, I tasted 13 of what surely were 60-plus bourbons. To have the single site exposure to not only those spirits, but the people who created them is an experience like none other.

Most interesting is I’ve only recently become a fan of bourbon. Always a fan of gin, I later was exposed to great tequila, whose wood-aged flavors could also be found in bourbon. The bridge was built and I walked over to the brown side to begin educating myself on Kentucky nectar.

You’d think that would be mandatory for a Kentuckian, but not really. The Commonwealth’s native spirit isn’t everyone’s favorite, but probably because they haven’t been taught to appreciate or drink it correctly: slowly and in modest quantities (one to two ounces at most); sniffing it to recognize its many aromas; and with food that complements it.

“Most people’s introduction to bourbon is from a bottle of it chugged at a tailgate party,” says Jim Beam master distiller Fred Noe. “They have a terrible experience, as you can imagine, and they say they’ll never touch the stuff again.”

I know that “terrible experience,” but I also know I didn’t like the flavors much to begin with, partly because I was tasting low quality whiskey.

I’ve come a long way since I had dinner with Julian Van Winkle, whiskey maker at Old Rip Van Winkle, three years ago. The main drinks to be served with a lengthy whole hog dinner that night were tastes of his exquisite and highly prized bourbon, even the Pappy 23 year old. When it can be found, it fetches at least $230 per bottle. There was no way I was going share a table with such a legend and not at least try to sip his whiskeys.

I did and I enjoyed it. Somewhat.

Next year, same dinner and a better experience. I was beginning to understand what I was looking for in the glass: subtle wood flavors, vanilla, cinnamon, spice and caramel all knitted together with some slightly fiery alcohol.

After what surely has been a few dozen bourbon tastings since, I bought a bottle for myself this summer, an affordable Old Forester 100 Proof. Not sure why, but I like the higher proof whiskies, which don’t burn my palate when sipped slowly. Old Foe also is highly approachable, balanced and slightly fruit forward. It’s friendly on the palate.

I must admit, to the shock of my friends, I’ve become a bourbon fan.

But gin is still my favorite. And last week I found an incredible bargain on one of my favorites, Hendricks Gin. A liquor store not far from where I and my wife had dinner recently had Hendricks Gin in a 1.75 liter bottle priced at $49.

I pointed it out to her and we both thought, “Surely that’s a mistake.” Typically that amount costs $62 in most Louisville stores. Turns out the price was true, and we bought it. Should have bought two!

I’ve been a Hendricks fan since a friend introduced me to it four years ago. It’s delicate, sophisticated, balanced, well rounded, bears bright botanicals and never offends. Just a great spirit.

So I bought and put it on my shelf “just for martinis” and made a standard one with dry vermouth and a lemon twist and it was really good. So good that I had two more the next night.

Only I’m not quite as in love with it as I used to be, and I think it’s because it’s so perfectly polished. I’m finding I like some rough edges in my drinks, and perhaps that’s due to my greater exploration into bourbon.

Exposure to several new gins in the past year have added to that sense and opened my palate to new flavors and textures, particularly Few (made in Chicago) and Death’s Door (made in Wisconsin). Few, I should add, is out of this world, yet I’ve not found it in Louisville.

Both are loaded with botanicals and bear noticeable grain notes not found in lesser gins. They’re a really nice expression of the mash they began with, and I like that.

Others, my wife included, may find that harsh, especially when consumed straight (the way I prefer, though I love cocktails, too).

And speaking of cocktails, here’s a good recipe for you shared with me by the bartender at St. Charles Exchange in Louisville. He calls it a gin Old Fashioned, though I’m not sure why:

In a rocks glass, blend the gin and the liqueur over ice, stir and let rest 2 minutes to chill; add bitters and stir.

Using a peeler, remove a strip of skin (about 1.5-inches wide and 3 inches long) from a pink grapefruit; press lightly with your fingers to express its oils and add to the drink.

Stir once more and serve.