A restaurateur called me, exasperated and agitated that a customer had thrown a fit in his restaurant. She was a long-time patron, but not beloved by staff or ownership; a chronic complainer; a trifling, entitled sort who demanded things her way as if she were in her own home. 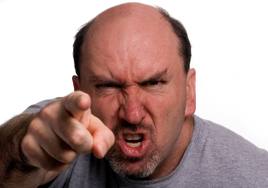 Her most recent hissy fit, the flustered owner said, was her sense that another customer was getting better treatment, a better table—“He always gets the best one in the house!” she ranted.

She didn’t leave it at the table, however, she disparaged the owner to his staff while he wasn’t in the building—which was another complaint since she believed the owner should always be there.

The restaurateur was outraged, of course, but he also was disappointed and disheartened, hurt even. He’d done all he could to please this guest, as well as the myriad others who’d been through his doors over the decades, but this time she’d gone too far.

“You get to the point that you don’t know what to do anymore because someone’s always got a gripe,” he lamented. “I’ve busted my ass for all this time to make everyone happy, but you get people like her who walk in the door unhappy and make it their mission to take it out on you and your staff.”

The owner’s reputation, I reminded him, is one who pleases far more guests than not, that the only complaint heard about his place is people can’t get in there because an overflow crowd beat them to it—and won’t leave.

I asked him what segment of his guests were like this troublemaker, and he said about 5 percent.

Perhaps blithely, I suggested the 95 percent who treated him well were more worthy of his focus than the harpy.

Which is easier said than done. I know this from my time waiting tables. More than two decades after hanging up my waiter’s apron … I can still tell you where they sat, what they looked like … those scoundrels who tipped me poorly for great service! “The nerve of those cads!” I yelled back then.

OK, that’s much cleaner than what I actually said, but I yelled to my boss, my peers, to God, to anyone who would listen willingly or otherwise. I’d been mistreated, disrespected and felt put down by getting a 45 cent tip from six men who appeared to have had a great time; a $1 tip on another occasion from a slightly difficult woman.

Oh, and the pain in the neck, ask a zillion questions about the specials, but still buy predictable food well-heeled doctor who never tipped more than 10 percent, I seethed over his mistreatment, too. Seems he thought his Steve Urkle smile was enough to compensate for his cheapness.

Of course, in my own immature anger, I was forgetting the thousands of others I’d served who’d tipped me fairly. Sometimes even unfairly, as in extraordinarily, for average service delivered on super-busy nights when I’m sure I missed a trick or two. Surely 98 percent of the people I served during my stint did me right or better.

But it’s the bad ones who stick out most with me.

As with the restaurateur.

But I can’t blame him. He’s got so much more skin in the game, so much more on the line when a customer complains. He’s given his life and significant dollars to his business, so he takes it personally if his staff or his brand is unduly offended.

The guy works himself like a rented mule, all day long and with few breaks, to do all he can to please his customers.

Yet some will never be pleased, and he believes their ranks are growing: those who demand perfection from a restaurant and its staff; those who attach their emotional well-being to a whether a mere meal satisfies them; people who believe the customer is always right, even when there’s no chance in hell they’re close to being right.

Or fair or friendly.

“Where is the line drawn on whether the customer is right?” the restaurateur asked.

My only thought was that it’s somewhere back in his mind, not theirs: a point at which he knows he’s done the best he can. If his own stratospherically high expectations aren’t met and the customer calls him on it, she’s right.

If she’s demanding some expectation never set forth by the restaurant, then she’s not.

One customer, the restaurateur said, voiced disappointment over his salad—sacre bleu, a salad!—and the restaurateur immediately offered to provide him a substitute and take the initial charge off the bill.

“But all that did was get him started,” the restaurateur said. “He started complaining about everything.”

The lights were too low. The room was too cold. The music wasn’t to his taste, etc.

A couple of days later, the customer even called the restaurateur and demanded the cost for not only his entire meal be refunded, but the cost of the meals eaten by his guests as well.

Because he was perturbed over a pile of greens!

“Can you believe that? That’s what he asked for!” the restaurateur said. “I’ll bend over backwards to make people happy, but that was too much.”

I agreed and said it’s not always been this bad.

Our patience as a society is disappearing amid the thickening fog of our own delusional self-centeredness. We’ve been doped by an insane message of consumer consciousness that says, it’s all about YOU!

“The choice is yours.”

“We won’t rest until you’re satisfied.”

If you believe all that, then YOU might be crazy!