A few years ago, Josh Merideth got the sense that Louisvillians knew too little about the treasures of their own city, especially its independent businesses. 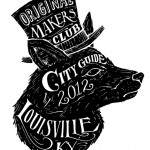 Working in Downtown Louisville, he found himself surrounded by artists, restaurateurs, fashion designers, hoteliers, bakers, architects—an endless supply of creative types whose products were unique to the city yet under-celebrated.

That notion, born of his civic pride, sparked the photographer’s own creativity to form a company that not only would elevate these businesses’ local profiles, but create events at which those owners’ would network in style.

“I believed that a lot of people weren’t being exposed to this fantastic creative energy that’s all over Louisville, and I wanted to do something that summed it all up,” said Merideth, who founded the Original Makers Club of Louisville about two years ago. “I wanted to take the best of the city, curate that and those people, and make it all come to life.”