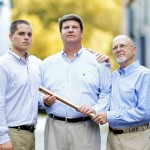 Cask Strength, which costs $149 per bottle, spends the last of its years aging in port barrels, and is 121 proof. Yet at less than 10 years old, Cask Strength not only got Pacult’s highest marks, he called it an “equivalent of the mythical Black Bowmore 1964 Sherry Oak Islay Single Malt,” which is a rare and nearly priceless Scotch.

“For him to say that about a spirit that was bottled in from 1964 just floored me,” said Wes Henderson, chief operating officer of Angel’s Envy, which is close to announcing where its Louisville distillery will officially be located. “If you could even find that Bowmore it would cost up to $10,000. It’s one of the most iconic spirits ever produced.”

In just three years, Angel’s Envy has drawn an amazing share of heavenly attention. A darling of the liquor press, the bourbon even drew a rating of 98 out of 100 points from Wine Enthusiast.