Get 19 Louisville chefs and at least that many cooks under one roof, and you’ve not only got a lot of terrific food on hand, you hear a lot of fun news about what’s going on in the Louisville restaurant scene. 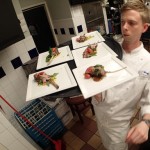 That group gathered last night at Corbett’s: An American Place, where they cooked for 650 attendees of the fourth-annual Bourbon & Bowties fundraiser for Kosair Children’s Hospital.

Most local restaurateurs are good friends who love to talk with and about each other, and we were on hand was on hand to hear a lot of cool news about changes at their restaurants, new jobs for some, even a possible end in sight to the Louisville Originals embezzlement lawsuit.

* Fernando and Christina Martinez, co-owners with Yaniel Martinez of Guaca Mole and Mussel & Burger Bar, said they plan to open a 42 seat, high-end restaurant in the basement of M&BB.

Fernando said patrons should expect clever and cutting-edge foods much like he produced while working in restaurants in Miami between the time he left Mojito Tapas Bar and Havana Rumba several years ago and returned to Louisville in 2011.