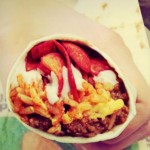 Such a gordita-size expansion goal is uncommonly ambitious for the Louisville-based company which owns two other mature restaurant brands in Pizza Hut and KFC (all three are 51 years or older).

According trade magazine Nation’s Restaurant News, Yum execs said on Tuesday that to do so, the Taco Bell system would have to grow from 5,700 units to 8,000 units and boost annual per-store revenues from $1.3 million to about $1.8 million, to arrive at a total of $14 billion — all in eight years.

To provide some pespective, for even a buttoned-up restaurant startup, to go from zero to two stores in one year is tough. To add 10 in the following year is a great achievement.

If the brand is just smokin’ red hot, it could grow to 50 by year five, and swell at about a 25 percent growth rate — if it’s on fire — over the next several years to get to 100 in about the span that Taco Bell will add 2,300 units.