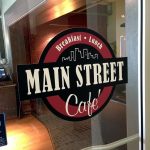 After opening as a lunch destination in March, the concept got a rebranding when it added a more extensive breakfast menu in October. And according to executive chef Larry Agnew, he and his partners wanted to do more to boost dine-in sales alongside its carryout sales.

“We wanted to expand breakfast more to go beyond being another Highlands coffee shop,” said Agnew, who also believed the Main Street location needed something a bit similar to Toast on Market. “In the changeover to the Café name, we’ve added servers and really changed the food. So far we’ve gotten a lot of great feedback.”