Call it ironic timing or a wake-up call to a gin drinker (me), but a good chunk of my freelance work lately has been devoted to writing about two of Kentucky’s most important bourbon towns, Bardstown and Lexington. 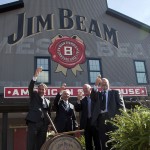 Distillers, once viewed as booze barons, are getting their due as rock stars of the spirits set. People want to know not only what makes up great bourbon, they want to know the distillers behind the bourbon and why they make it the way they do. (Recently, when I interviewed Jim Beam master distiller, Fred Noe, fans shuffled to and fro as we chatted on the front porch of an old home on the distillery property. Why? They wanted pictures with Bardstown’s most famous face and the chance to ask him about his craft; serious groupies getting the chance to meet a grain mash guru.)