A sign that culinary tourism has arrived here: Gwen Pratesi, the blogger behind Bunkycooks (a James Beard Award-nominated food and travel blog), is hosting a tour of Louisville 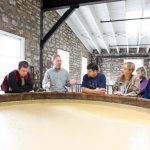 restaurants designed to give out-of-towners a look into the inner workings of some top Louisville restaurants, distillers and food producers.

According to a news release, the three-day, two-night tour running from Oct. 15 throug Oct. 17 is called On the Road, and its stop here will include mix-and-mingle time with chefs Anthony Lamas (Seviche), Bobby Benjamin (La Coop) and Ghyslain Maurais (Ghyslain on Market) in their respective kitchens and dining rooms.