Alltech, a $700 million Lexington-based company founded in 1980 to produce high-quality animal feeds, took a giant step in its slow, but steady expansion into the beverage alcohol business by opening Town Branch Distillery yesterday. It is the city’s first distillery opening in more than a century. 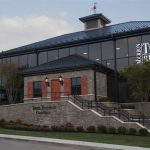 I wasn’t able to attend the ribbon cutting, but judging by the photo and everything else Alltech does, it’s first rate. Built with Kentucky limestone and featuring glass walls on three sides to showcase its centerpiece cooper stills, the joint’s a looker.