I go to a lot of soft openings/pre-openings/VIP receptions/previews/peeks … whatever you want to call them … before a restaurant officially takes off the wraps, and I sometimes leave those events thinking, “This one’s not long for this world.” 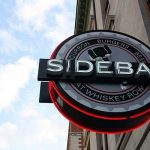 I harbor no such thoughts about Sidebar at Whiskey Row, which smartly conducted several private dinner services over the past week to get its staff trained and perfect its kitchen execution.

I’m a lousy bettor at Churchill Downs, so I don’t play the ponies. But I’d confidently lay money on this restaurant being a winner.

UPDATED 9:30 p.m. The name of the Sidebar at Whiskey Row was reported incorrectly.

Save for apple pie, there’s hardly a more iconic statement of culinary Americana than the hamburger.

The Breakfast Burger at Mussel & Burger bar in Jeffersontown.

In the last century, home grillers made it good while McDonald’s made it generic and ubiquitous.

Now seemingly every place from high-end restaurants to food trucks are making it bigger, better, fancier and pricier.

Corbett’s all-beef version sells for $15, which is the same nickel you’ll pay for St. Charles Exchange’slamb burger. A few dollars less will let you eat a wide range of burgers at Mussel & Burger Bar, which opened in early February.

Want all grass-fed versions? Get ‘em for about $10 when The Grind Gourmet Burger Food Truck is rolling or spend around $7 at Bluegrass Burgers.

If that sounds like a lot of options, know that two more “gourmet burger” places are opening soon. On Feb. 12, the chef-owners of Hammerheads will open Game, a high-end hamburger joint at 2295 Lexington Road. (Despite having no menu on its Facebook page, Game already has 697 Likes, which says a lot about how much people love Hammerheads.)