“Can that dog read?” a man asked the woman sitting next to him. The question surprised her, though it shouldn’t have. 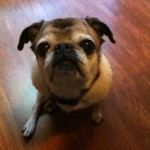 “Excuse me?” she replied.

“Can that dog read? That dog food bag,” he replied, pointing to a glossy papered package of premium puppy grub. “Can she read what brand it is?”

“Because if she can’t read, how does she know the difference between that dog food and any other?”

“By ‘any other,’ he meant cheap food, the $10 for 25 pound sacks of corn balls soaked in beef flavoring. The woman had just told the man her dog “doesn’t like any kind of dog food except that one.” The man implied with his reply that the dog would eat anything when it got truly hungry, so why spend the extra dough, he asked.

“It doesn’t matter to me, really, because I know this is the healthiest food I can get for her,” said the woman, gesturing with a cigarette in one hand and clutching a cheap vodka cocktail in the other.

That scene, and others like it, are ripe with irony: pet owners determined to oversee the health of their dogs while ignoring their own. “Don’t feed the dogs,” they say to guests sneaking bits of actual food—tasty food at that—to household pets lurking beside their dining table chairs, eyes pleading. “We don’t want them to learn bad habits—like begging at the table.”

Surely before dogs were domesticated, they enjoyed a wide array of food choices. But now most owners insist their pets stick to a diet only of chewy pebbles from a bag and the occasional faux-meat treat between meals for peeing outside. That their dogs go positively bonkers when I sneak them a bit of my own tells me they like variety.

I mean, how many dogs have you seen turn their noses up at any stray bit of food escaping from a cutting board or utensil falling to the floor?

My country cousins always fed their dogs table scraps, which surely wasn’t good, either. But good gosh how those pets lapped them up zealously. They enjoyed the food as much as we did.

“We don’t want him to get fat,” some dog owners say, their mouths often full of the rich foods that have made themselves dangerously hefty. “The last vet bill we had for him was outrageous.”

Not a tenth as much as what they’ll pay the cardiologist someday if they’re not careful.

Chances are that part of Rover’s heft is due to the fact he lies around the house all day, never meandering about in the wild like he was born to do. Save for bathroom breaks, one friend’s dog never leaves the house.

“He prefers the air conditioning,” she says. “And if there’s snow outside, I have to drag him out. It’s amazing how long he’ll hold onto his pee to avoid going out in the cold.”

In that respect, we’ve made our dogs like us: appalled by activity, anchored to cushy furniture, awash in climate controlled comfort.

But unlike our dogs, we’re not controlling our diets nearly as seriously as we’re controlling theirs.

That’s no fault of a restaurant or a food producer, the blame is solely ours. Unlike that woman’s picky dog, we’ll eat about anything.