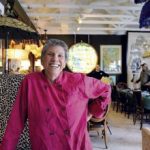 Between directing staffers on where to place tables, décor and bottles behind the bar, the grande dame of the Lexington restaurant scene talked shop with some of her peers: Debbie Long, owner of Dudley’s on Short; and Larry Dean, general manager at Chatham’s, among them. Each wanted to know if Slone Meyers, their 66-year-old friend, was ready to open the sixth, and likely final, restaurant of her storied, four-decade career.

Long stood while Meyers stayed seated, and the pair discussed the usual: other restaurants opening, the challenges of finding good help, whether a Valentine’s Day opening for Red Light was a good idea.

“Oh, they’ve all been wandering in,” says Slone Meyers, watching Long head out the door to her own restaurant. “We all do that to each other: check in and see what everybody’s doing.”

Slone Meyer’s phone rings and she takes the call, while employees wait to ask her more questions. The call ends, and without hesitation, she gives instructions, confident she knows what she wants done.

“Oh, opening on Valentine’s: I’ve lost my mind, haven’t I?” she says, her coarse laugh sliding into a cough. “I’ve always opened on a holiday; Halloween once. But Valentine’s: red heart, Red Light. It works.”

“I have lung cancer. You know that, right?” She says it as casually as you might mention the unseasonably warm weather. Last year, one tumor was discovered in her left lung, and another behind her sternum. She’s endured rounds of radiation and chemotherapy to battle it and responded well. Recently, however, doctors have grown concerned about another tumor on her pancreas.