Southern Wine & Spirits’ Academy of Spirits & Fine Service is like college in two ways: The level of education is incredible; and if you miss a class, you can always return and take it in the next semester.

I’ve done just that this year. I started my first 12-week run this past winter before as they say, life interrupted, and so now I’m back picking up where I left off, at lesson three.

Which brings us to yet another way ASFS is like college: this class centered on tequila. But not the drain cleaner most of us drank by the shot in college. In this class we tasted 18 tequilas and one mezcal, the bulk of which were exceptional brands that, had we tasted them at a bar, our tabs would have been at least $200 and possibly $300. 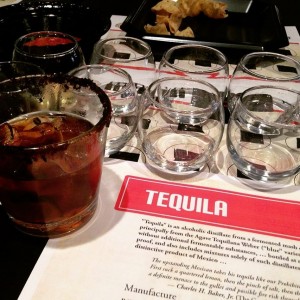 (It’s worthy to point out that ASFS only costs $200 for all 12 weeks. That’s an incredible bargain for anyone interested in turning up their booze knowledge to at least “11.”)

The class started, as it always does, with a beverage. This time it was the legendary and easy to make Batanga, a staple in the town of Tequila, Jalisco, Mexico. Here’s our instructor Gary Gruver’s recipe.

Moisten glass rim and dip in fine salt to coat.

Add ice to the glass, add tequila, squeeze lime wedge and toss in glass, and follow with Coke. Stir with a knife and serve. Yes, a knife.

When visiting a bar in Tequila, the bartender stirred our group’s Batangas with a well-used, wooden handled steak knife like you’d find at Outback Steakhouse.

And then he used the same knife to chop onion, avocado, cilantro and lime for some of the best guacamole I’ve ever eaten.

All tequila is mezcal, but not all mezcal is tequila. That’s history speaking, not laws like we have governing bourbon.

But like our bourbon restrictions, both tequila and mezcal may only be produced in Mexico.

Mezcal was co-invented the Spanish explorers to Mexico in the 1500s, who noticed natives drinking pulque, a beer made from fermented agave hearts called pinas. The Spaniards applied their distilling knowledge to the pulque and turned it into a spirit dubbed mezcal.

Mezcal is made by burning coals to heat rocks in an earthen pit. To that pit pinas from wild and cultivated agave plants are added, and the whole is covered with dirt for long, slow roasting. The pinas are crushed to release their sugary syrup, which is fermented and distilled in amazingly clever but crude assemblages of clay pots, bamboo shoots and, in some cases, metal helmets.

Mezcal’s smoky aroma and flavor are dominant and not for the faint of heart, but it’s become incredibly popular in the last decade. (A good way to appreciate it while learning about it is to enjoy it in a cocktail rather than neat.)

In making tequila, only the hearts of cultivated Blue Webber agave are used. They’re cooked in stone ovens or massive steamers called autoclaves. The pinas are then crushed or shredded to release their syrup, which is fermented using wild yeast. Some distilleries use pot stills, others use column stills.

Compared to mezcal, tequila is sweet, clean and bracing, though it shares many citrus and pepper notes. Tequila also is commonly aged, though mezcal typically isn’t.

Mezcal is produced in very small batches, sometimes as little as 200 cases per year. According to Gruver, for every single bottle of mezcal sold, 150 bottles of tequila are sold.

While people are amazed at the number of bourbons on our shelves, it’s nothing compared to tequilas available. Today there are more than 100 distilleries are making more than 1,100 tequila labels, compared to about 350 bourbon labels.

For that rush to the back of the liquor pack we credit Prohibition!

Tequila knowledge takeaway No. 1: Cooked agave pinas are processed in two ways: they’re either crushed by stone wheel, called a tahona, or shredded mechanically, and each process affects the flavor profoundly.

To my palate, both are fantastic, each serving a unique purpose in telling the story of the agave, and in lending themselves to sipping neat or immersion in a cocktail.

Gruver then led us through the 19 spirit tasting, which began with Cuervo Gold. Yes, he had to draw the baseline somewhere, and that’s where he started.

Cuervo Gold is what’s called mixto, which means it only has to be 51 percent tequila. The rest can include neutral spirits, flavorings and colorings. Yeah, we all thought it special when we were in college since we knew so little about tequila. Now you should know better.

What followed was one of the best bargains on the market, Altos blanco, which costs about $20 for a 750ml. On the heels of that were selections from Patron’s baseline silver, resposado and añejo tequilas, served along with tastes from Casa Noble and Don Julio.

I appreciate what Patron has done to elevate the spirit of tequila in the U.S., but for the price, it lacks personality. It’s too cleanly distilled for me.

Yet what our next round of tasting included was Patron’s Roca line, which is created using the tahona to crush the agave, plus some added finesse in distilling. That yields tremendous flavor in all three expressions (silver, reposado and añejo), which comes at a price, of course: $69, $79, $89 respectively.

Round two also included the venerable Don Julio 1942 ($140 per bottle) and its bright, pepper and citrus notes, followed by the lush, sweet and complex Casa Noble añejo ($79 per bottle).

It was fun to watch the sworn bourbon-only drinkers’ jaws drop when tasting the aged tequilas. It also was fun to hear the horrified gasps of some when sipping the lone mezcal. I said it tasted of burnt rubber, others said band-aids and one woman said it reminded her of a fresh can of tennis balls. All are correct.

Mind you, this is school, people! This is what about 15 of us were gathered to learn. And as I used to do after three hours of hard studying in college, tequila class warranted a long nap afterward.

Next up for Lesson 4: Cognac.