It is, perhaps, an impossibility to not like a class where the instructor greets you at the door with a cocktail. According to lead instructor Gary Gruver, that’s how Class 1 and the 11 subsequent classes will run at the Academy of Spirits & Fine Service. 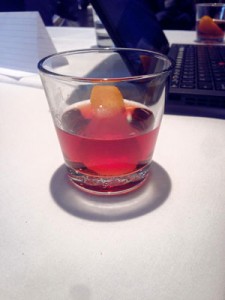 Ever start a class with a Negroni? It doesn’t suck.

The class is, after all, focused mostly on boosting the booze and bartending knowledge of restaurant personnel and alcoholic beverage enthusiasts (me), so why not start with a Negroni, right?

“Why a Negroni?” Gruver asked. No answers from the capacity class of 26 students, most of whom admitted later they’d never had the famous drink made of equal parts of sweet vermouth, gin and Campari. “Mostly because it’s my favorite cocktail. It’s a classic cocktail, too, and that’s a lot of what we’re going to focus on.”

Created 15 years ago by Las Vegas bartender Francesco Lafranconi and sponsored by Southern Wine & Spirits, ASFS is taught in several major U.S. metros. Those instructors, bartenders and chefs among them, are flown to teach different classes in their areas of expertise. According to Gruver, these personalities are among America’s best in the trade.

“It’s cool that that Southern spends the money necessary to bring these inspirational people here,” he said. At a cost of just $200 per student, the class is heavily subsidized by Southern, and Sullivan University provides Winston’s Restaurant as the classroom. “I think I’m pretty fortunate to be involved.”

As do I. In the past few years, I, my wife and friends have gotten into the cocktail craze with the rest of America. After immersing myself in great wine during my restaurant career (1980s), craft beer commanded my palate in the 1990s. The new millennia brought an interest in spirits and, finally, great cocktails. As food and drink writer, I needed to know more about them, and so I signed up.

Gruver began the class with a quick overview of cocktail history, including its darkest moment, Prohibition in 1920.

“Does anyone know what happened to all of America’s great bartenders during Prohibition?” he asked. “They all went to Europe because they couldn’t work here. So when you hear people say Europe is further ahead on the cocktail scene than we are, that’s a big reason why.”

When Prohibition ended in 1933, few knew little about great cocktails, so manufacturers stepped into make shelf-ready mixes, which remain prevalent today. But in the 1980s, bartenders such as New York’s Dale DeGroff (then at the famed Rainbow Room) began researching classic cocktail recipes and started bringing them back. Gruver said that ever since, America’s cocktail culture has evolved away from “sugar bomb sweet drinks … to more balanced cocktails that sometimes are even bitter. … That’s another reason I chose to start with a Negroni.” 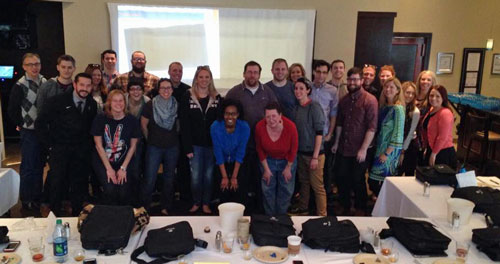 My 25 classmates for this 12 week course. Good group.

The class concluded with a bourbon and food pairing designed to isolate the contrasting flavors of sweet, savory, salty and bitter ingredients. The idea, Gruver said, was to establish taste reference points that enable bartenders to balance liquid ingredients in the glass and pair any alcoholic beverage with the right foods.

“You see in restaurants where people think a bottle of wine they’ve ordered is bad, that it’s corked,” Gruver said, using the term to describe wine degradation due to a cracked or crumbling cork. “But most of the time it’s not corked, it’s a bad pairing. We’ll work on these kinds of things in this class.”

Next class: We go to the Evan Williams Bourbon Experience in Downtown Louisville. Class 2 and we’re already on a field trip.

* Trivia note: We learned that the term “on the rocks” was born in Scotland where drinkers would take small, winter-chilled stones from creeks and rivers, and then add them to their glasses to cool their Scotch whisky.