I’ve come to the conclusion that most people who aren’t rich don’t like those who are because of a few simple reasons: 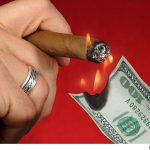