From Nation’s Restaurant News: Pizza Hut pioneered the five-minute pizza a quarter century ago with the introduction of its Personal Pan offering. The problem was, much like Henry 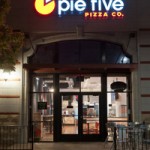 Ford’s “black only” Model T, toppings options were limited, and pizzas were premade and held in hot boxes to make for speedy lunch turns.

That’s all changed with Pie Five, the mini-chain sibling of Pizza Inn, based in The Colony, Texas. Quick customization is the core of this fast-casual concept, which serves a menu of 11 specialty personal pizzas alongside the option to customize one with 21 toppings, seven sauces, two crusts and four cheeses.

Seven units already have opened in 15 months, proving that Pie Five has traction, said Dave Ostrander, a pizza operations and marketing consultant. He said he’s surprised no one moved on this option earlier “because it’s a knockoff of what happened one generation ago at Pizza Hut. But where it’s not a knockoff is in the Subway-style format. Customers get to look at their choices, have it their way and get it quick.”