From Edible Louisville: Roger Baylor never set out to be the unofficial spokesman for the craft beer movement in the Louisville area. But in the 19 years since he, ex-wife Amy Baylor 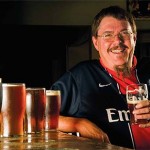 The trio’s “Spanish Civil War moment,” as Baylor calls it, was to refuse the sale of “industrial swill” (a.k.a. mass-produced beers) at Rich O’s and instead build a following by sourcing unique and well-made beers from U.S. microbrewers and overseas. Over time, and despite the establishment of microbreweries in the Louisville area, Rich O’s became the favored local haunt for beer geeks eager for new finds.

In 2002, the owners “went legit,” in Baylor’s words, by joining the ranks of Louisville brewers (Bluegrass Brewing Co., Cumberland Brewery and Browning’s Brewery) by making their own beer under the New Albanian Brewing Co. name. That success flowed into the creation of Bank Street Brewhouse, a modern gastropub, also in New Albany, in 2009.